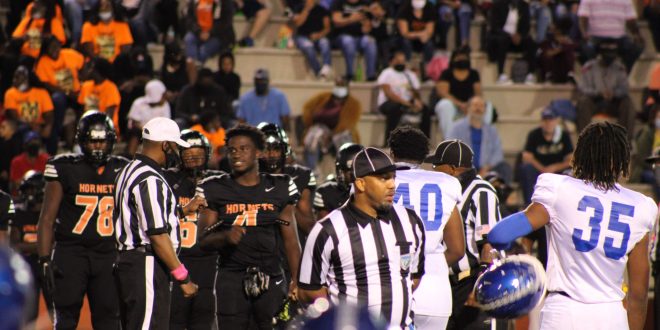 As the FHSAA football playoffs are nearly two weeks away we have a few more games in the regular season. There are a few football matchups in the Gainesville area this Friday.

The Hawthorne Hornets are coming off a 32-0 victory against the Palatka Panthers last week after suffering their first loss to the Bradford Tornadoes the week before. In this week’s matchup, the Hornets will face Union County Fightin Tigers, who defeated the Williston Red Devils 24-0 last week.

The Fightin’ Tigers look to advance to 5-2. Manny Covey, their sophomore running back, rushed for a total of 149 yards and one touchdown in 24 carries in their game against the Red Devils last week. Their quarterback AJ Cortese has thrown for 504 yards and 7 touchdowns this season.

So, the Fightin’ Tigers should look to use both of their offensive weapons in Cortese and Covey against the Hornets defense Friday night.

Thanks to Jeremy Brown for speaking to Tigers today! Man made a killing running trap, belly! Also had our very own @CJSPILLER on the phone to say a few words!! I had to coach against those 2 way back! Heck of a wing-t combo! #TigerPride @UCH_Football pic.twitter.com/rOjbzhqn17

The Hornets will need to look to have an excellent defensive performance against the Union County offense. Jayquan Williams had 11 tackles with 6 of them being solo tackles and one fumble recovery in his game against the Panthers.

In the offense, the Hornets should look to quarterback Chaz Mckey who has thrown for 453 yards and 7 touchdowns this season, to lead the team to victory.

The game will take place at Hawthorne at 7 p.m. In their last meeting, the Hornets defeated the Fightin’ Tigers 27-12.

The Buchholz Bobcats (3-1) will host the Fleming Island Golden Eagles (5-1) this Friday night at 7 p.m. as they look to advance to 4-1. The Golden Eagles won their last matchup 27 – 7 against the First Coast Buccaneers increasing their record to 5-1.

Timothy Thomas in 17 carries, Golden Eagles senior running back, ran for a total of 221 yards and averaging 13 yards per carry in the last game against the Buccaneers. Thomas has had five touchdowns with 637 yards this season and three 100 plus yards games. Fleming Island should look to use their rushing game to defeat the Bobcats on Friday.

The Bobcats should look to use their running back Quandarius Smith who has rushed for 292 yards and one touchdown averaging 11.7 yards per game. Smith has rushed for 20 touchdowns in his two season with the Bobcats and has 1871 yards, so he should be a part of the game plan for Friday’s game.

In their last meeting, the Golden Eagles defeated the Bobcats 42-19.