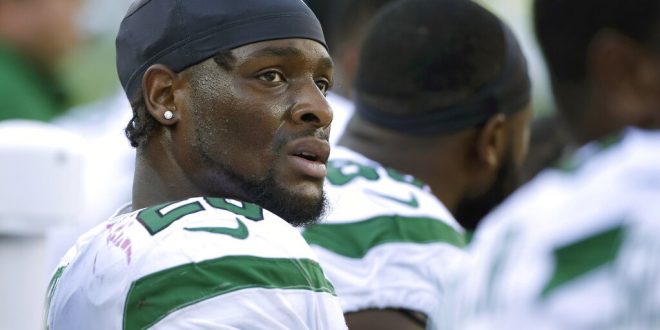 File-This Sept. 22, 2020, file photo shows New York Jets running back Le'Veon Bell watching from the sideline near the end of the second half of an NFL football game against the New England Patriots, in Foxborough, Mass. The New York Jets have surprisingly released Bell, ending a disappointing tenure after less than two full seasons. The team issued a statement from general manager Joe Douglas on Tuesday, Oct. 13, 2020, in which he says the Jets made the move after having several conversations with Bell and his agent during the last few days and exploring trade options. (AP Photo/Steven Senne, File)

Former New York Jets running back, Le’Veon Bell is excited for his new gig as a Kansas City Chief (5-1). He signed with the team last week.

Bell started his NFL career as a Pittsburgh Steeler after being selected in the second round during the 2013 NFL Draft and signed with the Jets in 2019. Bell had a pretty successful run with the Steelers. He was recognized in the NFL Pro Bowl and was ranked 16th in the NFL Top 100 Players in 2015.

Bell’s Time with the Jets

Bell signed a four year, $52.5 million contact, but was unable to reach his full potential in New York. The Jets had a weak offensive line, which caused Bell to have the lowest stats of his pro career.

In a press conference Wednesday, he addressed his former team.

I had two years [with the New York Jets] where it has not been a high level, and people kind of look at it like that. So I wanted to get here, get my feet back under me, get in a good offense, get the ball when I can [and] not have too much pressure on me, just play football. Go out there and just play football, that’s really what I want to do. Coming here is going to give me the opportunity to do that.

He also discussed his excitement in working with Cheifs’ head coach Andy Reid and the ability to share the field with MVP players like Patrick Mahomes.

Obviously coming here, getting on a great team, a great coaching staff, just kind of re-invent myself.

Patrick Mahomes referred to Bell as a weapon.

He started practicing with the team Wednesday as they prepare for their matchup with the Denver Broncos (2-3) on Sunday.

Sara Dastgerdi is a current student at the University of Florida.
Previous Heartbroken Fitzpatrick reluctantly accepts backup role
Next Mississippi State looks to refocus on offense during bye week