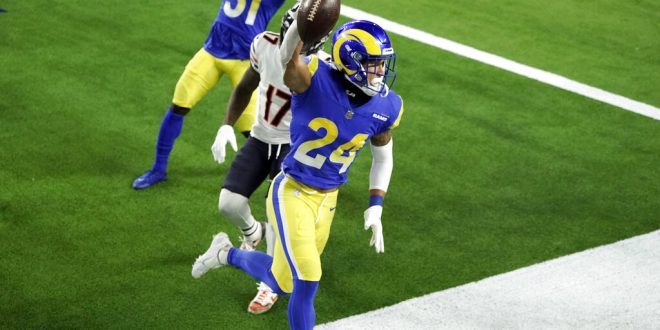 Los Angeles Rams safety Taylor Rapp (24) celebrates after intercepting a pass in the end zone during the second half of an NFL football game against the Chicago Bears Monday, Oct. 26, 2020, in Inglewood, Calif. (AP Photo/Ashley Landis)

The Chicago Bears fell 24-10 against the LA Rams in Monday Night Football. They are now 5-2 as they stand at the number two spot in the NFC North.

The Bears struggled offensively while the Rams shined on the defense. Part of these offensive struggles from the Bears was the O-line’s inability to cover their quarterback. They allowed four sacks during this game.

Bears quarterback Nick Foles and his offense also failed to covert their 3rds and 4ths downs. They converted four of their 13 3rd downs, while only getting one of their four 4th downs. Foles also threw two interceptions during this game.

The Rams played good defense during this game, limiting the yards allowed in the game for the Bears. Chicago was only able to rush for 49 yards as David Montgomery got 48 yards, and Cordarrelle Patterson rushed for one.

Bears head coach Matt Nagy recognized that this affected their drives. Not being able to execute the plays also brought down the energy.

Another thing that hurt the Bears was their penalties, which they started getting early in the game.

“We gotta start fast. When you come out and get a penalty it kills the drive. Penalties hurt, you cannot have them early on in the game.” Said Nagy. “You cannot have penalties in 4th and 1 trying to move the sticks. That’s the part when we have to figure out when this is going to stop.”

The Rams had many key defensive plays during this game. But their defensive play of the game has to go to Rams safety Taylor Rapp who caught an important interception in the third quarter.

Rams head coach Sean McVay complimented his team for the defensive execution and even gave a few players a special shoutout.

Despite shining on the defense, their offense was not as effective as it could have been. The Rams only got 210 passing yards, with the Bears earning 20 more than that. They also lost the opportunity to score a field goal early in the fourth after the Bears blocked the kick.

Rams quarterback Jared Goff threw for 219 yards in the game. He completed 23 of his 33 attempts to end the night with two touchdown passes.

Next, the Rams will travel to the Sunshine State to face the Miami Dolphins. This match will feature Miami rookie Tua Tagovailoa’s first game as the Dolphins’ starter. The game will be Sunday and kickoff is set for 1 pm.

The Chicago Bears will go home to host the New Orleans Saints. The game will be on Sunday and kickoff is set for 4:25 pm.

Camila is a senior at the University of Florida studying Telecommunications with a specialization in production and a minor in Innovation. She is also seeking a Sports Management certificate. Camila is also WUFT's news director as well as a sports reporter/anchor.
@CamilaMaffuz
Previous Mullen talks returning to practice, Mizzou
Next Dodgers Gear Up For Game 6