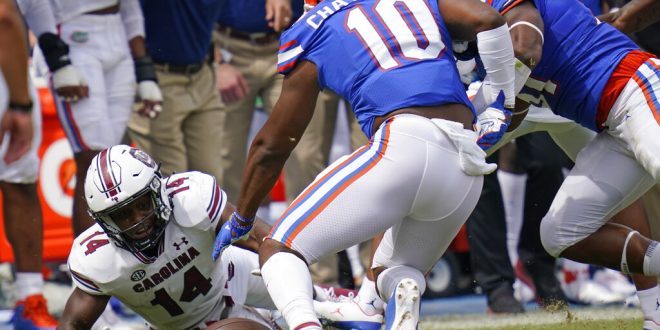 The start of this football season hasn’t been what many Gators envisioned.

Due to over 30 positive Covid tests within the program, Florida had two games postponed while the team quarantined. From an on-field perspective, the team’s defense has not played up to standard in the three games that were played.

Linebacker James Houston IV spoke with the media on Wednesday to discuss how the Gator D plans to turn things around.

Houston feels like talent is not the problem for the struggling unit. “We have the talent and capabilities to be one of the best defenses in the SEC,” he said. “At his point, it’s all mental.”

Familiarity can be a problem for units at the start of any season, especially after a strange offseason. Houston pointed toward execution as the main area for improvement, as well as simply “winning our one-on-ones.”

One factor that could lead to immediate improvement is Kyree Campbell’s return to action. The senior defensive tackle announced that he will return to action against Missouri, and is exactly the type of leader the unit needs. Houston said, “He’s almost the core of the defense.”

With Campbell back to fill the tackle position, guys like Zachary Carter and Brenton Cox should be able to play their more natural positions. Improvement is desperately needed in the front seven, which has struggled against both the run and pass.

Seemingly, a two-week break from practice would be harmful to a group looking for answers. Despite the circumstances, Houston remains confident.

He spent the break watching film, lifting, and doing drills on his own, and said teammates have put in similar work. Houston even explained some of the home drills he came up with.

“You’re either getting better or worse. I don’t like getting worse.”