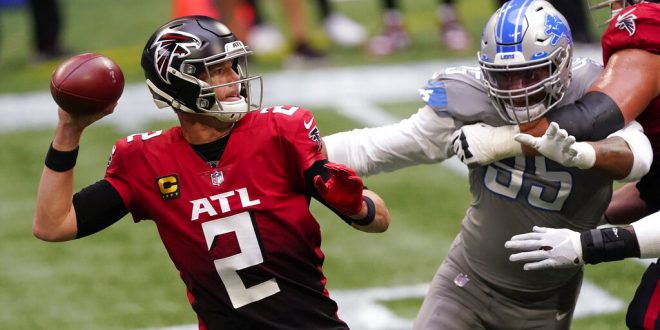 Falcons and Panthers Battle in TNF

The Atlanta Falcons will travel to Charlotte, North Carolina to take on the Carolina Panthers for Thursday Night Football.

Atlanta is just 1-6 this season after multiple heartbreaking losses. In three of their six losses, the Falcons dropped a fourth-quarter lead. Two of those losses also came on the last play of the game.

Carolina is just 19-32 all-time against Atlanta, but the Panthers have already beaten the Falcons once this season. Back in week five, Carolina brought down the Falcons 23-16. If the Panthers win, it will be their first season sweep of Atlanta since 2013 and just the fourth in the all-time series history. Panthers head coach Matt Rhule knows that from their previous matchup, this game will be a fight to the end.

Since their last matchup against Carolina, a lot has changed. Just a day after their first loss to Carolina, head coach Dan Quinn and general manager Thomas Dimitroff were both fired. Wide receiver, Julio Jones, was also out against Carolina with a hamstring injury. Since returning, he’s averaged eight receptions and 117 receiving yards.

Starting games hasn’t been the problem for Atlanta. The Falcons have scored first in five of their seven games. And while their pass defense is ranked 31st in the NFL, their passing defense ranks sixth. However, Falcons head coach Raheem Morris knows that in order to compete, they will also have to up their pass defense.

They were close to their second win in week seven against the Detriot Lions but fell short in the final seconds. However, Matt Ryan had his second straight strong performance at quarterback. Ryan threw for 338 yards and a touchdown in their loss to Detriot after throwing for 371 yards and four touchdowns in their win at Minnesota.

Carolina played weeks three through six without star running back Christian McCaffery. McCaffery suffered a high-ankle sprain in week two against the Tampa Bay Buccaneers but got the all-clear from doctors to suit up for practice this week. However, it is still unknown if McCaffery will be available for this week’s game.

One struggle area for the Panthers is opponent’s third-down conversion. Opponents convert almost 72% of third downs and 100% of third-and-one attempts. However, the Panthers are allowing just 9.2 yards per reception, which is the fewest in the league.

Quarterback Teddy Bridgewater ranks fifth in passing yards with 1,676 on the season and he ranks second in completion percentage at just over 72%.

The Panthers will only have one listed as doubtful on the injury list this week. However, that one doubtful player is starting left tackle, Russell Okung.

Listed as questionable for Carolina are right guard John Miller, defensive tackle Zach Kerr and defensive ends Marquis Haynes and Efe Obada. The Panthers also have until 4:00 pm to add McCaffery back to the roster from the injury reserve. However, the panthers do not want to bring McCaffery back too soon and risk losing him again.

The Falcons only have one on their injury list in starting defensive end Takk McKinley. McKinley has been dealing with an ongoing groin injury and has missed three of Atlanta’s last five games. However, McKinley is the only one listed a designation, which should mean everyone else is good to go.

The Falcons and the Panthers will battle tonight at 8:20 pm on FOX.