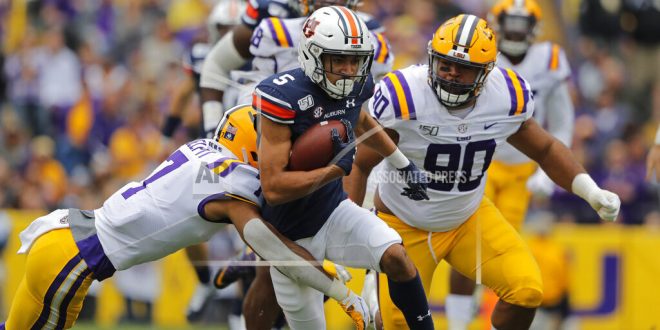 Gators and Tigers flood Ben Hill Griffin Stadium before the end of the first half of Florida-Missouri. Let’s recap the big stories from Week 8 and look at what’s happening in Week 9 of college football.

Florida quarterback Kyle Trask was hit on the last play of the first half by a Missouri defender sparking an all-out brawl. Gators defensive linemen Zachary Charter and Antwuan Powell were ejected from the game along with Missouri’s Tre Williams. In addition, every player on both teams have received an unsportsmanlike penalty.

The Gators crushed Mizzou’s chances of winning by the end of the third as Florida had established a 34-7 advantage and made off with a 41-17 win.

Gators climbed up two spots to No. 8 in the AP poll ahead of its clash with No. 5 Georgia. The upcoming game could decide the winner of the SEC East. The Gators will square off against the Georgia Bulldogs at 3:30 p.m. ET next Saturday at TIAA Bank Field.

No Lawrence, No Problem

Freshman quarterback D.J. Uiagalelei rallies Clemson Tigers past Boston College. The game came with a scare for Tiger fans due to Trevor Lawrence’s absence after testing positive for COVID-19 earlier in the week. Clemson managed to survive the potential upset by storming back from a 28-13 halftime deficit to beat Boston College 34-28.

No. 1 Clemson will go against No. 4 Notre Dame in a potential game of the year. Clemson coach Dabo Swinney confirmed that Lawrence will not be available for the matchup.

No power conference altered its 2020 football schedule quite like Pac-12. First, the season was postponed until Sept. 26 then conference presidents and chancellors voted to postpone the season until Jan. 1. However, after implementing sufficient COVID-19 testing protocols, the Pac-12 plans to start on Nov. 7.

The Pac-12 will be the final FBS conference to begin play, as it tries to cram in seven games in seven weeks. The biggest question is whether the eventual Pac-12 champion might receive serious consideration for a College Football Playoff bid, considering how few games the conference has scheduled relative to its peers.

The Spartans beat the Wolverines 27-24, and it wasn’t because of a missed call. Michigan State had a 71-yard touchdown drive on its second possession of the game to take a 7-0 lead, and the Spartans never trailed after that.

Michigan State quarterback Rocky Lombardi finished with 323 passing yards and three touchdowns to lead the Spartans offense. He connected with freshman Ricky White eight times for 196 yards and a touchdown. Michigan had 452 yards of offense but struggled defensively throughout.

Minnesota Loses To Maryland In OT Over Missed Field Goal

The University of Minnesota football team is off to an 0-2 start after a 45-44 loss in overtime at Maryland. The Terrapins prevailed after the Golden Gophers missed an extra point that would have tied the game and sent it to a second OT.

The Gophers scored 31-straight points in one stretch, but Maryland rallied with 17 of its own to force overtime. The Terrapins scored first in the extra session but Minnesota answered with Seth Green’s 2-yard touchdown run. However, the Terrapins ran off the field in celebration after Brock Walker missed the extra point.

Previous Eagles win to take control of the messy NFC East
Next All Around the SEC: Week 9