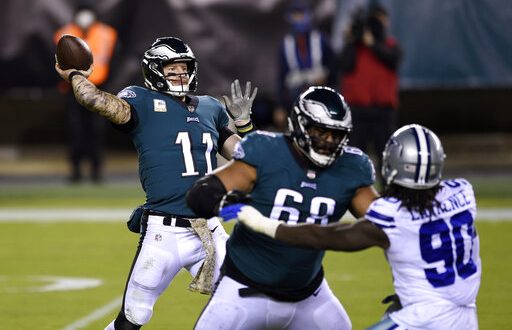 Eagles win to take control of the messy NFC East

The Philadelphia Eagles defeated the Dallas Cowboys Sunday night 23-9. At 3-4-1, the Eagles are now in sole possession of first place in the NFC East.

The Eagles’ defense did not allow an offensive touchdown Sunday night. Rookie third-string quarterback Ben DiNucci could only muster three field goal drives for the Cowboys.

Philadelphia all but sealed the game with a scoop and score to make the game 21-9 late in the fourth quarter. Rodney McLeod scored on a 53-yard fumble return after T.J. Edwards sacked DiNucci. The play looked to be dead at first, and an Eagle player trying to recover the fumble looked to be down. However, the whistle did not blow, so play continued, and the touchdown counted.

Carson Wentz had an up an down game. He threw for 123 yards, had two interceptions, two touchdowns, and was sacked four times. Also, Wentz lost two fumbles.

Coach Peterson talked about Wentz and his turnover problems.

Overall, Philadelphia only put up 222 yards of offense, but were able to still win a tough game.

With there being 6 combined turnovers in the game Sunday night, this game was a good representation of the NFC East.

The NFC East is the only division in which all four teams have a negative point differential. The Eagles are going into their bye week at 3-4-1 atop the division. The Washington Football Team is in second places at 2-5. The Cowboys are a half game behind the Football Team at 2-6. Lastly, the Giants are 1-6 and playing the Bucs tonight on Monday Night Football.

Since division realignment in 2002, only two teams have won their division with a record under .500: the 7-9 Seahawks in 2010, and the 7-8-1 Panthers in 2014. Both teams actually won their Wild Card game at home, but lost the next week in the Divisional Round.

The Eagles are on pace to join those two under-.500 division winners at the halfway point in the season. 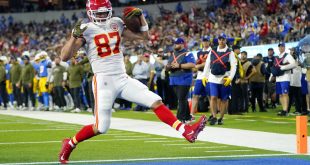