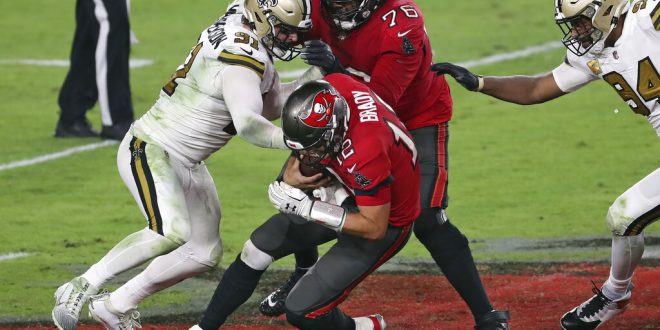 In a battle of future Hall of Fame quarterbacks, Tom Brady forgot to show up. The Tampa Bay Buccaneers quarterback suffered the worst defeat of his career in Sunday night’s 38-3 loss to the New Orleans Saints. Previously, it was a 31-0 shutout against the Buffalo Bills in 2003.

Meanwhile, Drew Brees threw four touchdowns in one of his trademark performances. As a result, he regained the NFL passing-touchdown crown over Brady. Brees leads 564-561.

With the win, the Saints completed the season sweep of the Bucs. New Orleans also knocked off Tampa Bay in Week 1, 34-23. After recording three interceptions Sunday, the Saints have picked off Brady five times this season.

Another key point is the Bucs have struggled mightily in prime-time. According to ESPN Stats & Information research, they scored only 15.7 points per game in their three prime-time games so far. That mark pales in comparison to their offensive output in non-prime-time games.

Brees heated up quickly against the Bucs. He found a wide open Tre’Quan Smith at the back of the end zone, who toe-tapped in for the opening score. Then, rookie tight end Adam Trautman caught his first career touchdown to close the first quarter.

In the second quarter, Emmanuel Sanders made a diving touchdown grab to extend the Saints’ lead. After an Alvin Kamara rushing score and a Will Lutz field goal, New Orleans breezed into the half with a 31-0 edge.

The Saints pressured Brady all night. It led to three sacks and three interceptions. David Onyemata, Malcolm Jenkins and Marcus Williams all picked off Brady. Meanwhile, Trey Hendrickson recorded a pair of sacks.

Tampa Bay (6-3) looks to get back on track in Carolina Sunday. The Panthers gave the Chiefs a scare but lost 33-31, falling to (3-6). Christian McCaffrey dazzled in his return with 151 all-purpose yards and two scores.

New Orleans (6-2) took control of the NFC South with its win over the Bucs. The Saints will try to keep their division lead against the 49ers (4-5) at home Sunday. San Francisco will be rested after playing on Thursday night in a loss to Green Bay.