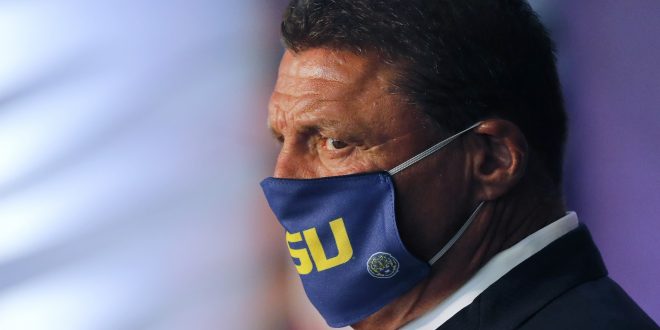 LSU’s game against No. 1 Alabama on Saturday is in jeopardy because of a COVID-19 outbreak in the Tigers program.

Coach Ed Orgeron confirmed Monday that several LSU players tested positive for the virus. To make matters even worse, a multitude of other players are in quarantine due to contact tracing. He refused to go into detail with reporters about the exact number of players that are missing, though.

The SEC says that anyone who tests positive for COVID-19 must go through a mandatory 10-day quarantine. And those considered to be a “high-risk contact” must isolate for 14 days. Additionally, the SEC requires teams to have at least 53 scholarship players for any given game. This includes a minimum number of quarterbacks (1), offensive linemen (7) and defensive linemen (4).

Sports Illustrated’s Ross Dellenger reported Monday that LSU’s outbreak can be traced back to a party in late October. He also said the Tigers are on the verge of the conference’s player threshold to compete.

#LSU’s outbreak stems from a party around Halloween and, because of contact tracing, has put the Tigers dangerously close to the SEC’s 53-man threshold to play, sources tell @SINow.

Team is very thin at defensive back and quarterback.

Starting quarterback Myles Brennan has already been ruled out for Saturday’s game. As a result, true freshman TJ Finley will be LSU’s only scholarship quarterback available against Alabama.

Orgeron noted that Brennan’s absence will make life more difficult for the Tigers offense. However, the LSU coach may have something up his sleeve for the top-ranked team in the nation.

Saturday’s game will be tough to reschedule if it cannot be played.

The Tigers already had their bye week earlier in the season. And their Oct. 17 game against the Florida Gators was moved to Dec. 12 because of UF’s problems with COVID-19. There remains the possibility of moving LSU-Alabama to Dec. 19 if both teams fail to make the conference championship game. However, with Alabama leading the SEC West, that doesn’t seem likely.

Another option is for the SEC to rearrange other games around the league to create space for a rivalry that has taken place each year since 1963. That wouldn’t be fair to other teams in the conference that have already played half of the season.

LSU has been in contact with SEC executives in regard to the ongoing situation. Although a decision on the game is expected in the next 24-48 hours, the Tigers are preparing as if Saturday’s showdown is already set in stone.