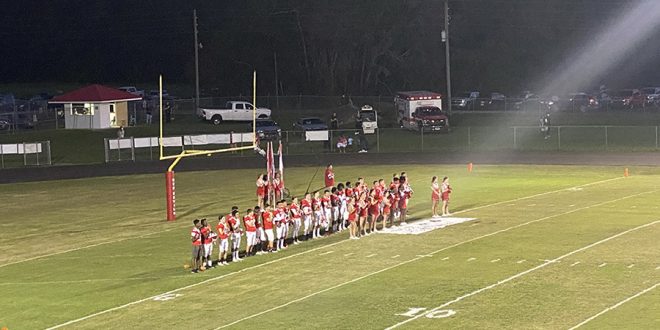 The Red Devils line up in the end zone for the national anthem.

On Saturday, Fort Meade demolished Williston from beginning to end to secure the first playoff win of the season, 47-0.

Unfortunately, Williston did seem to be without a handful of players in this game, such as senior quarterback Tiger Days.

Dominant First Half for Miners

To get the action started, the Miners marched down the field on a long drive setting themselves up in the red zone. They finished the job on a short touchdown run followed by a successful extra point from junior kicker Guadalupe Acevedo.

At the end of the first quarter, the Miners led the Red Devils 7-0. This was just the beginning.

On the Red Devils second possession, a couple of runs up the middle by sophomore Edariyon Wesley helped them cross midway to the Miners 44-yard line. However, they went for it on fourth down shortly after and did not convert.

Fort Meade took over in the second quarter where the Devils left off. After a big run by Miner junior Jon Cole II, Williston’s defense applied pressure. Sophomore Sariah Aviando sacked quarterback Rafael Cabrera for a loss. Fort Meade punted, but the Red Devils muffed it and allowed the Miners to scoop it back up at the 11-yard line. This led to another Miner touchdown run to make it 13-0 Fort Meade after a failed two-point conversion.

That was the start of a rough second quarter for Williston, who gave up 33 total points to the Miners. It seemed as if the Red Devils never got a possession as every time they touched the ball, Fort Meade stole it back.

After two recovered onside kicks and a forced fumble, the Miners had extended their lead to 33-0 and things were getting out of hand. One of those touchdowns came when Cabrera launched a pass that was caught by junior Xzavia Smith and ran for a 55-yard touchdown.

With only one minute to go, Cole II put an exclamation point on a phenomenal half for Fort Meade. He danced around in the backfield for an eternity until a lane was found on the right sideline all the way down for a 93-yard touchdown run. Williston went into halftime down 40-0.

A Fast Second Half

Because Fort Meade reached the 35 point mercy rule lead going into halftime, the third quarter started with a running clock. This gave little time for Williston to make any sort of comeback.

The Devils began the quarter with the ball, but they did not make much progress. The drive ended with quarterback Lowman Kavanuagh’s pass intercepted by junior Marcus Calderon.

Back on offense once again, the Miners made quick work getting down the field to the Williston four-yard line. Junior Cameron Johnson punched it in for the score. Acevedo nailed the point after to put Fort Meade up 47-0 at the end of the third.

This touchdown made it even more unlikely that Williston would stop the 35 point mercy rule lead causing the clock to run. Therefore, the rest of the fourth quarter went by quickly leading to the final score being 47-0 Miners.

The Miner’s record increases to 5-3 as the Williston Red Devils finish their 2020 season at 3-7.

The Fort Meade Miners will advance to play Hawthorne at home this Friday, and the winner of that game will take on whoever prevails from Wildwood vs Newberry. 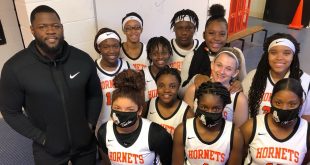 Hornets Easily Fly Past Miners to Move Onto Regional Finals