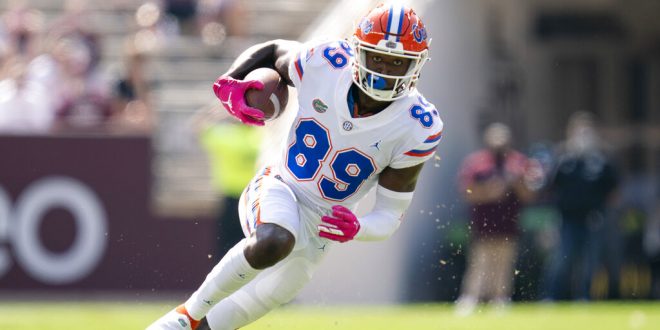 Sure, Kyle-to-Kyle is fun to talk about. But, if you’re the Florida Gators, having a complete set of weapons is even better.

This year’s Gators offense is making a push to be the best in the team’s history. Having a quarterback that’s making a Heisman case is the first step in doing that. But a quarterback needs his receivers, and the Gators possess them.

In the absence of Kyle Pitts, we have seen the entire Gators receiving corps step up to keep this machine of an offense running. One notable wide receiver has been senior Trevon Grimes. In Monday’s press conference, Grimes said he has taken advantage of the opportunities he has been given this season.

In the first six games of the year, Grimes collected 303 receiving yards. He tallied five touchdown catches as well. At this pace, Grimes should well surpass all of his career numbers thus far. He already passed his career-high in touchdown catches. In the Arkansas game, Grimes received more yards than in any game he played in during the 2019 season.

But again, one receiver does not make an offense. Grimes has been backed up by his fellow receivers like Justin Shorter.

Shorter, a sophomore wide receiver, has seen more action compared to his time at Penn State. He has three touchdown catches, compared to none last year, and already has as many catches and receiving yards as he had during his time as a Nittany Lion. Grimes said the wide receivers understand the importance of sharing the ball, and they support each other–mentioning Shorter specifically–when they stand out.

Spreading the Ball Around

The more options you have, the more the opponents have to stay on their toes. In the Arkansas game, the Gators saw 10 different receivers make a catch in the game. Six receivers made multiple catches.

This is not a one-off thing. It isn’t happening because Pitts is gone either. In every game this year, the Gators have had eight or more players make at least one catch in a game. When broken down, there truly is not a go-to guy to cover downfield. Someone else is open, and he will catch it and take it to the house.

It makes the difference.

The Gators will be back to flash the passing game again on Saturday when they travel to Nashville to play Vanderbilt at noon.

Harrison is a sports coordinator at ESPN 98.1 FM/850 AM WRUF. He served as a beat writer for Florida Gators football for the 2019 and 2020 seasons. He also contributes to WRUF's Gainesville Sports Center segments and makes appearances on the Clash on Harp on Sports. Harrison has been a content writer for WRUF since January 2019 as well.
@HarrisonSmaj
Previous Texas A&M Reacts to Second-Straight Postponement due to COVID-19
Next Countdown to the 2020 NBA Draft