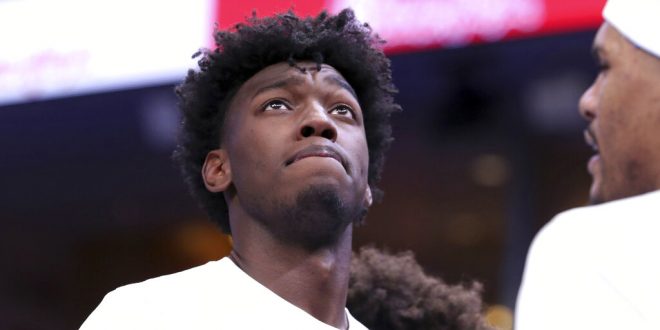 FILE - In this Tuesday, Dec. 3, 2019, file photo, Memphis' James Wiseman pauses during a timeout in the second half of an NCAA college basketball game against Bradley, in Memphis, Tenn. Wiseman is the headliner of the big men in the NBA draft on Wednesday, Nov. 18, 2020, and is expected to go in the top three picks. (AP Photo/Karen Pulfer Focht, File)

Countdown to the 2020 NBA Draft

Will there be surprises?

And this year’s no different.

The Start of Something Special.

Without a consensus top pick, Wednesday night might just be the most interesting draft nights in years.

What You Need To Know

Barring a stunning change of events, three prospects — LaMelo Ball, James Wiseman and Anthony Edwards —are projected to be taken 1-2-3 in what has turned out to be a highly debated order.

Though the 19-year-old Ball has positioned himself as the frontrunner, some front-office heads view Edwards as the safer choice in the top three, a less-risky option than Ball and Wiseman, per ClutchPoint’s Bruno Manrique.

He’s not the perfect prospect.

But with his rare athletic ability that often lends itself to explosive bouts of athleticism, it’s enough to warrant top selection.

The 6-foot-5-inch guard creates good mid-range looks, is capable of hitting the step-back jumper and is a great one-on-one scorer.

He can also cut to the rim and run the lane on the fast-break.

To some, however, the upsides to his game are still not good enough to overlook his lack of engagement on the defensive end or his inconsistency at the three-point line (he’s hit just 29.4% of his 3-pointers as a freshman at Georgia).

But for the Minnesota Timberwolves, who are still contemplating whether to keep their No. 1 pick or trade down, it might just have to do.

It’s no longer 2015 and there is no clear-cut top pick like there was that year when Minnesota selected Karl-Anthony Towns first overall.

As is the case with tomorrow night’s NBA Draft and all other sporting events of this year, 2020 is nothing like we’re used to.

Previous Gators Wide Receiver Corps on Another Level
Next Brees Out, Winston In, Saints Optimistic