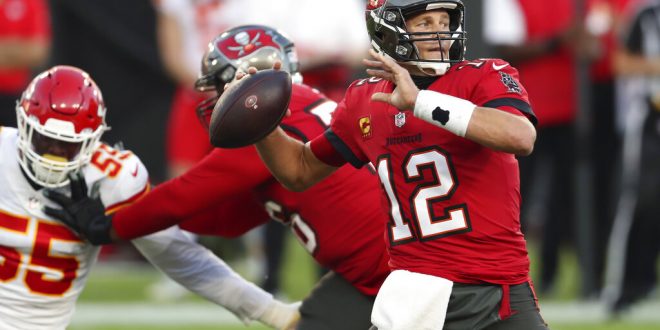 The Tampa Bay Buccaneers’ chances of being NFC South Champions are depleted after their 27-24 loss to the Kansas City Chiefs. An explosive game from quarterback Patrick Mahomes and wide receiver Tyreek Hill moves the Chiefs to an impressive 10-1 record.

On the other hand, Tom Brady and the Buccaneers move to 7-5 with a focus on ensuring their playoff spot.

A Slow Start For Tampa Bay

Mahomes started the game off by feeding the ball to Hill. The Chiefs reached the goal line, but Mahomes failed to capitalize on a crucial third and goal play. Mahomes’ pass sailed just out of reach for tight end Deon Yelder. The Chiefs settled for a field goal from kicker Harrison Butker, putting them up 3-0.

Kansas City quickly got possession of the ball again after the Buccaneers offense got off to a rough start. Mahomes threw the ball deep to Hill for an impressive 75-yard touchdown furthering the Kansas City lead 10-0.

The Buccaneers continued to struggle on offense as they failed to convert any points in their first few offensive drives. Mahomes took advantage of the Buccaneers slow start by connecting with Hill again down the field for another 44-yards and the touchdown. The Chiefs established a 17-0 lead by the end of the first quarter.

The Buccaneers’ offense began to find offensive momentum at the start of the second quarter. A strip sack by Tampa Bay’s Shaquil Barrett allowed defensive end William Gholston to recover the ball for the Buccaneers.

Set up at the Tampa Bay 14-yard line, Brady and the Buccaneers’ offense started connecting. Ronald Jones II left his Chief defenders in the dust for a 37-yard touchdown pass from Brady. The Buccaneers began chipping away at the Chiefs lead, 17-7.

The Chiefs responded with a field goal to end the half, leaving them up 20-7 over the Buccaneers.

At the start of the second half, Jones continued to take action for the Buccaneers’ offense, running the ball down the field to the goal line. However, Brady failed to connect with a receiver in the end zone forcing Tampa Bay to settle for a field goal. Kicker Ryan Succop knocked in a 26-yard field goal to put the Buccaneers within 10 points of the Chiefs.

On the Chiefs’ next scoring drive, Mahomes threw an absolute dime to Hill while in coverage by Tampa Bay’s Carlton Davis. Kansas City scored another touchdown, extending their lead against Tampa Bay, 27-10.

The third quarter didn’t treat Brady well, as the quarterback threw for two interceptions on back-to-back drives. His first interception, intended for wide receiver Scotty Miller, was picked off by Bashaud Breeland. On the following drive, Brady’s second interception came off the helmet of a defender. Tampa Bay’s defense picked up as they held the Chiefs from scoring again before the end of the third quarter.

At the start of the fourth quarter, Brady kicked it into gear on a fourth down finding Mike Evans down the field for an impressive 31-yard reception. Evans carried the ball on the same play into the end zone for the touchdown, keeping the Buccaneers alive 27-17.

The Buccaneers defense came up big as they kept Mahomes and the Chiefs from scoring. Brady continued to rally, finding Evans again in the end zone for a seven-yard touchdown. However, the Chiefs cut the Tampa Bay rally short, managing to hold possession of the ball until the clock ran down. Kansas City left Tampa Bay with another win, 27-24.

Up Next For The Buccaneers

The Buccaneers will be hosting the Minnesota Vikings at the Raymond James Stadium this Sunday.