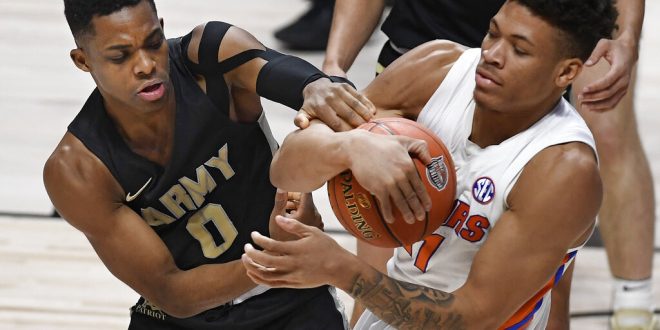 Army's Josh Caldwell, left, and Florida's Keyontae Johnson fight for possession of the ball in the second half of an NCAA college basketball game, Wednesday, Dec. 2, 2020, in Uncasville, Conn. (AP Photo/Jessica Hill)

New season. New team. The Florida Gators take on the 3-0 Army in Mohegan Sun (Bubbleville). With their playoff hopes crushed last season, will this year end with the same disappointment? Or will Florida make it into March Madness? There is plenty of games to be played. Nonetheless, today is the first taste of Gator basketball for 2020-2021.

It took the Gators nearly two and a half minutes to score their first basket. And, head coach Mike White wastes no time calling his first time out three minutes into the game. The timeout is what Florida needed as Keyontae Johnson burst onto the court to get the offense going. But, Johnson spent some time on the bench after acquiring three personal fouls.

However, the defense was wishy-washy. Florida’s 3-point defense was shaky to say the least. Army scored 40% of their threes, while the Gators only made two of their eight attempts. The unseasoned team lacked complete coverage allowing Army to take a 39-31 lead into the half. Army looks like a team that played three games, while it was clear that Florida has played none.

Gators in second half

The second half was electric. The Gators took the lead for the first time today 43-42 off a dunk from Johnson. Although, Johnson is not the only offensive contributor. Tyler Appleby scores a three, making Florida five for eight FG, to open the half. Appleby brings a needed energy to the court.

There momentum continues as the quicker pace matches more baskets. Tre Mann is the driving force for this Gator team, leading the team with 19 points, a new career high. On top of that, he also six rebounds and four assists. Additionally, Johnson put up 16 points as well as Appleby with 15.

The final four minutes were deadlocked. It was a back-and-forth scoring race. Each team answering back when needed. In the end, it was the Gators who emerged as the winners, taking down army 76-69. Florida wins their 29 season opener in 30 seasons.

#GatorsWin – Missed it, we've got your highlights ⤵️