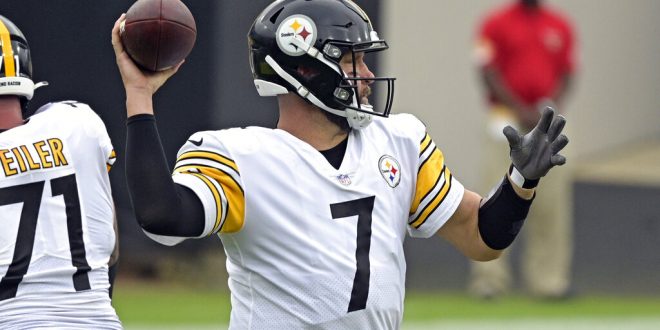 Pittsburgh Steelers quarterback Ben Roethlisberger (7) throws a pass against the Jacksonville Jaguars during the first half of an NFL football game, Sunday, Nov. 22, 2020, in Jacksonville, Fla. (AP Photo/Phelan M. Ebenhack)

COVID-19 has affected the entire NFL season. From players opting out at the start of the season to the Denver Broncos not having a quarterback, it has touched nearly every aspect of the game. Now, thanks to the pandemic, NFL fans have Wednesday afternoon football.

The divisional game between the Baltimore Ravens and the Pittsburgh Steelers was originally scheduled to be played on Thanksgiving night. However, after numerous positive tests from both sides, the NFL decided to delay the game multiple times. Originally it was moved to last Sunday, then Tuesday and, finally, Wednesday afternoon. ESPN’s Adam Schefter said the NFL’s main priority is containment, not competition.

The game itself will feature two of the best teams in the AFC when healthy. The issue is neither of these teams are healthy. The Ravens are going to be without their MVP quarterback Lamar Jackson and their two starting running backs, as well as multiple defensive starters because of positive tests. The Steelers’ starting running back James Conner is also going to be out due to COVID-19.

Baltimore will be starting former second overall pick Robert Griffin III at quarterback. The former Washington Football Team starter won the Offensive Rookie of the Year award in 2012 and was well on his way to a promising career before an ACL injury.

Pittsburgh comes into this Week 12 matchup with a spotless 10-0 record. They are one of just 17 teams in NFL history to start the year with at least 10 wins. Out of the other 16, six of them went on to win the Super Bowl.

Edwards is the third-string running back for the Ravens, but he will draw the start this week with both JK Dobbins and Mark Ingram on the COVID-19 list. Despite being third on the depth chart, Edwards has seen a lot of work in a run-heavy offense. He has 85 carries on the season, going for 376 yards and three touchdowns. He averages over five yards per carry for his career and has shown that he is more than capable of carrying a large workload. In week 16 of 2019, Edwards carried the ball 21 times for 130 yards in a win over the Steelers. Without their usual starting quarterback, Baltimore is going to have to rely on Edwards for production if they have a chance to knock off the unbeaten Steelers.

I could’ve just listed the entire Pittsburgh receiving corps, but I’ll stick with Johnson. When healthy, Johnson has been quarterback Ben Roethlisberger’s favorite target. He has played at least 75% of the snaps in games where he stays healthy, drawing at least six targets in seven of those eight games. He has gone over 100 yards in back-to-back weeks. Teams cannot afford to double the dangerous wideout either. Pittsburgh also boasts receivers Juju Smith-Schuster and Chase Claypool, as well as tight end Eric Ebron. There are simply too many weapons for defenses to hone in on one player. While Baltimore does have a ball-hawking secondary, Johnson should make an impact in this matinee.

The game is scheduled to kickoff from Pittsburgh for Wednesday football at 3:40 p.m. EST on NBC. It is at 3:40 p.m. because NBC is airing the lighting of the Rockefeller Christmas tree at 8 p.m.

Michael Hull is a sophomore at the University of Florida and is currently studying Journalism & Sports and Media.
@Michael_Hull33
Previous Jacob Copeland Discusses Florida’s Future
Next Magic Open Training Camp for Start of 2020-2021 Season