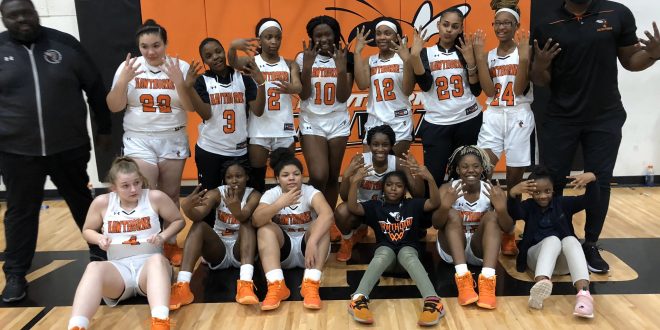 As much as the coaches believe in the players, the feeling is mutual.

“We have the best coaching staff that there is,” freshman Kentavia Hagins said. “They help us on the court and off the court. They teach us a lot of things we wouldn’t get on our own.”

Kentavia Hagins (@taviam_1) takes a pass from Jayla Williams (@Jayla4x) and drives in for a nice midrange jumper to put Hawthorne up 16-13 early in the second quarter against Holmes County.@ESPNGainesville @HawthorneHoops pic.twitter.com/RT9alx849B

Hawthorne’s coaching staff finds success because they all work together and help each other’s teams out. The players see this and follow their coaches’ lead.

“There’s probably plenty of coaches out there that know more X’s and O’s than us, but can you get the kids to buy in and believe?” Adkins said. “We have kids that would run through this wall if we told them to because they buy in. We don’t have the tallest, the most athletic, the biggest, or the strongest, but we have kids that totally believe what we say.”

As dominant as both teams were by the end of the season, there were definitely still numerous learning moments throughout the year.

“We would sometimes tend to play down to teams, so we would have to regroup,” Leiana said. “Most of the time we would start out how they start out, never at our full level. That’s something we worked on and got better at through the season. We need to just go ahead and blow them out because the game will be over. Don’t play around with them.”

The Lady Hornets lost their final game of the regular season at home against P.K. Yonge, 50-46.

“Sometimes you need that loss to humble you,” Cue said. “We only had two losses on the season, and we felt we should have won both of them. After the way the girls reacted with no crying or sadness, we knew were a good team. We knew we lost this game. There wasn’t anything that they did. It was more what we did. They learned from it and carried it through the playoffs.”

Learning how to overcome adversity helped the girls advance once they got to Lakeland to face Holmes County in the state semifinals. Star point guard Jayla Williams fouled out near the start of the fourth quarter. After a back-and-forth run, Hawthorne trailed by six with a minute left.

“We called timeout, and we just kept telling the girls, ‘We’ll win this game, all right? You got to believe,’” Ingram said. “I’m talking to kids 16, 17, 18 years old, so some of them already have water in their eyes because they’re looking at the time and the score. But you still have the coach in that moment. Even if they were feeling that way when they first hit the bench, by the time they took the floor, I could tell they were more relaxed.”

With Williams out, the Hornets were without their primary ball-handler for nearly a quarter.

“Other girls who were never used to handling the ball for that long had to move around and play different positions,” Ingram said. “On top of that, the team we were playing was playing with a lot of confidence at the time, so for us to win that game, I knew that no matter what happened, the state championship game was ours.”

Just like the girls, the boys learned how to overcome adversity throughout the season by suffering through winnable losses.

“Our low point was probably our second game where we lost to Crystal River,” Lawrence said. “After we lost that game, we checked social media, and everybody was saying we would probably have a bad season, so we had to really pick it up from there.”

The boys went on a 15-game winning streak following that game until they ran into North Florida Educational Institute in late January.

“That’s a great long team, all 6-6 and above,” Adkins said of NFEI. “We lost by two in a game we all felt like we should have won. You just know, no matter who we play, we’re gonna hang our hats on the defensive end. Just having that confidence in the team, we’re never gonna be out of the game. It doesn’t matter how much they score; our boys are gonna be in it just because we have that dog fight mentality.”

In the playoffs, Hawthorne got it done when it mattered most.

“We were losing to Williston in the district championship game, and Coach Bowie told us to just go out and figure it out,” senior guard Carlteon Brooks said. “And as a team, we were able to do just that.”

After trailing the Red Devils by four entering the fourth quarter, the Hornets won the final period 24-11 to win by nine. Ten days later, Hawthorne survived another close scare. In the regional finals against Wildwood, the Hornets’ 28-point lead whittled down to as little as five but they held on for the win.

“My favorite moment of the season was when we beat Wildwood,” Torey said. “Nobody believed in us. No one respected my game or Hawthorne’s game until after that game. The crazy thing is if you watched the game, we led from start to finish, and the lead never got within five once we got up. That’s a dominant win, one of the most dominant of the season.”

The Wildwood game was just as fun from the sidelines, McFadden explained.

Crazy scene in Hawthorne as the Hornets defeat Wildwood 69-59 to advance to the State Semifinals in Lakeland.@ESPNGainesville @HawthorneHoops pic.twitter.com/OX7CDcXO2V

“I didn’t play, but the Wildwood game was really special to me,” he said. “They really showed the love in the city. The gym was packed. The lady behind us was a Wildwood fan. She was talking junk the whole game, and we were trying not to say anything. I just laughed, and I got in trouble after that.”

At the start of the playoffs, Bowie repeated to his team the phrase “6-0” as the team’s new mantra. Hawthorne needed only to win six games to clinch that elusive championship, but it was clear one game stood out more than the rest.

“Coach Bowie said, ‘If you believe what I say, you’re going to win state,’” McFadden said. “Wildwood was our hardest game. He was like, ‘If y’all beat Wildwood, it’s ours,’ because it’s always either Pahokee or Wildwood that’s in the final.”

Even with how confident both teams were heading into the state championships, each game was a nail-biter.

In their worst offensive performance of the season, the Lady Hornets still survived 33-32 on the backs of their defense.

“It was super stressful because I almost blew the game,” Leiana said. “Everybody will tell y’all that. But it was funny afterward! Everybody almost ran each other over-celebrating. It was like the football team was out there.”

Just as it did for the girls, the boys championship game came down to free throws and defense. In between two consecutive Hilliard turnovers, Lawrence nailed two freebies to all but seal the game.

“I had the butterflies in my stomach,” Lawrence said. “I was excited, and I even shocked myself because I shot bad on free throws all year. For me to hit those shots in a clutch moment like that, I was happy. As soon as the game was over, I ran around the court like three times.”