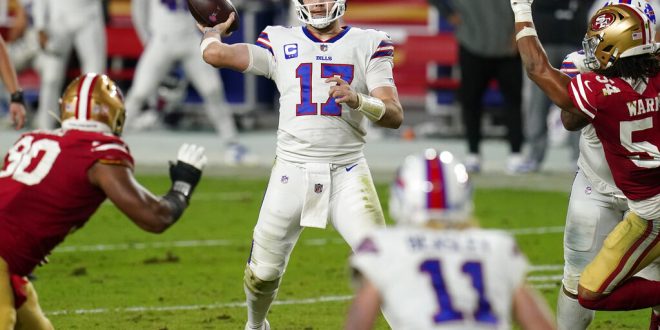 Saturday, Josh Allen and the Buffalo Bills match up against Lamar Jackson and the Baltimore Ravens. The Bills are on a roll this season looking to extend their play-off run.

The Bills enter this match up against Baltimore Ravens 13-3 for the season looking to advance to the AFC championship. Entering this game the Bills have been on a seven game run making it the longest active win streak in the NFL and longest in team history since 1990. Questionable having the second best offense in the NFL.

Prior to this match up the Bills eliminated the Indianapolis Colts 27-24. Quarterback, Josh Allen has had an outstanding season playing with  MVP caliber and having  outstanding performance against the Colts. One of the dominate quarterbacks in the league as Allen sits at fifth in the league with 4544 passing yards. Allen went 26 of 35 passes for 324 yards against Indianapolis.

Josh Allen has improved over the three season with the Bills, his percentage rate in passing completions has increased from 52.8 in 2018 to 69.2 in 2020.

The Bills have not hosted a game after a wild card weekend in 27 years since beating the Raiders in 1994. Going into this match, the Bills defense has a quite a task at hand with trying to slow down Baltimore’s electrifying quarterback, Jackson from his versatile run ball game. Both quarterback have a lot to prove coming into this match up both being drafted in the same class.

Allen and Jackson come in to this game both drafted in 2018. Allen drafted seventh overall and Jackson drafted the 32 overall pick.

Stefon Diggs is another key part to helping Buffalo pull out this win. Getting the ball into receiver Diggs hands is vital for Buffalo. Diggs stands number one in the league  for receiving with 1535 for the season.

Kick off for this AFC football battle is set for Saturday in the Bills home stadium. 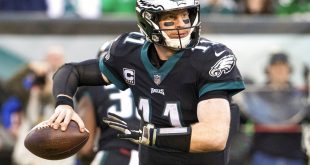 Will Carson Wentz be the Next Quarterback Traded?

The Philadelphia Eagles may be the next team preparing to trade their starting quarterback. With …