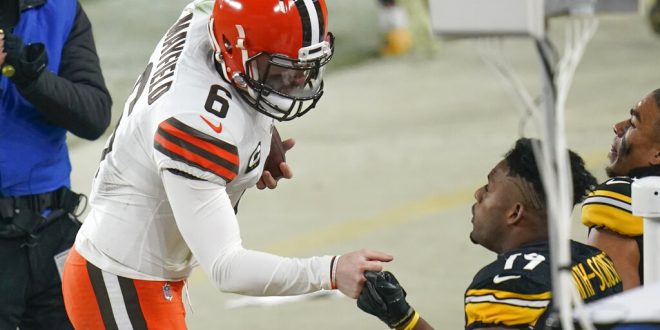 The AFC Wild Card games gave us some great action on both sides of the ball. Both games on Sunday resulted in an upset with the lower-seeded teams advancing to the Divisional Round.

This game was the visual definition of a game is won or lost by the run. Because the Baltimore Ravens were able to run the ball well and prevent the run from Tennessee, they were able to win.

Lamar Jackson showed off his athleticism all game with 136 rushing yards including a 48-yard touchdown. He also threw for 179 yards and one interception.

For Jackson, however, this was more than just any other win. This game was Lamar Jackson’s first playoff win.

The Titans were unable to get much offense going at all. They totaled 209 yards to Baltimore’s 401. The NFL’s leading rusher in the regular season, Derrick Henry, gained just 40 yards on the ground with a 2.2-yard average. Throughout the season, he averaged 126 yards per game.

When asked about Tennessee’s struggles, quarterback Ryan Tannehill said it came down to a lack of execution.

The highest-scoring game of the wildcard weekend, the Browns-Steelers game showed that it’s not how you start the season, it’s how you finish it. The Steelers started the year 11-0 but went 1-5 since then, including this loss.

Both offenses moved the ball with some ease. The Steelers’ Ben Roethlisberger, however, threw four interceptions over the course of a game which saw them battling from behind from the start. Despite his turnover struggles, Roethlisberger threw for 501 yards and four touchdowns with 68 pass attempts.

The Cleveland Browns played a clean game with three passing touchdowns from Baker Mayfield, two rushing touchdowns from Kareem Hunt, and a fumble recovery for a touchdown by Karl Joseph as well as four total interceptions by four different players.

The Browns put the Steelers in shock by putting 28 points on the scoreboard in just the first quarter. The Steelers battled back going 23-7 with the Browns in the next two quarters, but it wasn’t enough.

This game was almost as even as it gets for an AFC Wildcard game. Both quarterbacks threw for just over 300 yards and two touchdowns. One rushing touchdown was scored on both sides. Both teams had one fumble. The only difference, Buffalo’s kicker, Tyler Bass, didn’t miss. Indianapolis’s Rodrigo Blankenship missed a 33-yard field goal late in the third quarter.

Buffalo quarterback Josh Allen was doing everything for the Bills’ offense. He scored all three touchdowns for the team. Despite going into halftime up 14-10. Allen thinks the team needs to “find a way to pick that up” talking about getting off to faster starts.

Jensen Young is a journalism student at the University of Florida. He works as a sports writer for WRUF.com and is the voice of trendings on Monday afternoons on the WRUF radio station.
@Jensen_Young9
Previous Gators Women’s Basketball Drops Fourth Straight
Next NFC Wild Card Weekend Recap