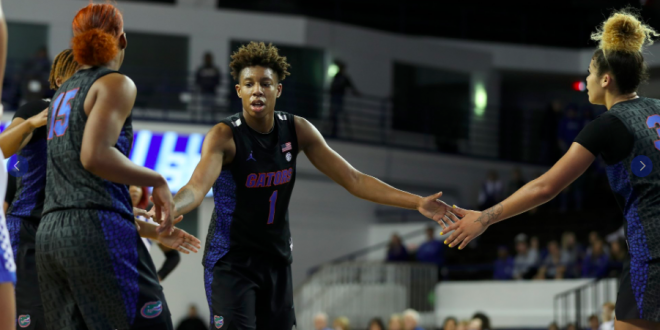 The Florida women’s basketball team seeks its first victory of 2021 tonight against the No. 17 ranked Arkansas Razorbacks.

The Gators lost the three games played in 2021 so far, while Arkansas fell in its last two games. Both teams started the season strong in 2020 with good non-conference records, but have struggled in SEC play.

Stars for the Gators

The Gators started the season with a solid record in non-conference play, with a few players recording strong numbers over the span.

Sophomore guard Lavender Briggs continues to post stellar numbers for the Gators, leading the team with 17.8 points per game. She scored a season-high 23 points in the Gators’ first SEC game against South Carolina and has scored 15 points or more in seven consecutive games.

Senior guard Kiara Smith is a strong contributor as well, with her 15.0 points per game being the only other double-digit average aside from Briggs. Additionally, Smith averages 3.7 assists per game and 2.3 steals per game, both team highs.

The talented backcourt duo of Briggs and Smith should continue to control most of Florida’s offensive tempo. Sophomore guard Nina Rickards is another big offensive weapon, particularly from beyond the arc.

Prior to the start of SEC play, the Gators posted an impressive 7-1 record in non-conference games. Despite facing no ranked teams, the Gators won each game easily, with their only loss coming against Florida State on the road.

Following the end of non-conference play, the Gators opened their SEC season against No. 5 ranked South Carolina, ultimately losing 75-59. This marked the beginning of a rough start for Florida in the SEC, going winless up to this point.

The Gators hope to turn things around against an Arkansas team that is also on a losing streak, including an upset loss to an unranked Tennessee team. The Razorbacks are led by senior guard Chelsea Dungee, who averages 20.5 points per game.

A win over Arkansas can give Florida some momentum heading into a three-game stretch against unranked opponents.

Coverage of Thursday’s game starts on our station at 8:15.

Previous James Harden to the Nets in 4-team megadeal
Next L.A Rams hope for another playoff win, face Aaron Rodgers and the Packers