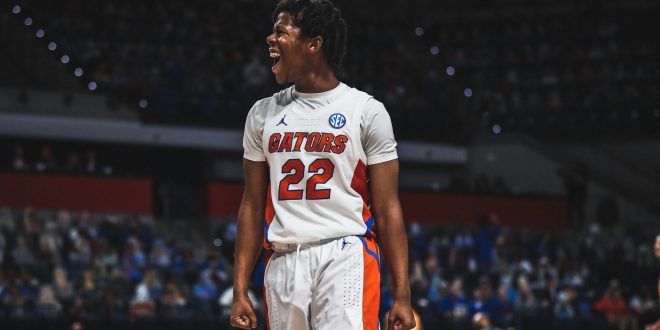 It was the night that everything seemed to connect for the Gators. And could they have picked a better night than against the No. 6 team in the country?

The Florida Gators had everything stacked against them. Down multiple influential players, greatly outmatched on defense and more. However, that didn’t seem to matter as they took down the No. 6 Tennessee Volunteers 75-49.

The Gator defense was the star of the first half, holding Tennessee to just 29% shooting while scoring 38 on the nation’s number two defense.

With Scottie Lewis and Colin Castleton out and Tre Mann and Anthony Duruji in early foul trouble, it was up to the bench to pick up the slack. and they did exactly that. Guys who previously got very limited minutes came up huge for the Gators.

Omar Payne stepped up in a big way for Castleton, going for nine points, nine rebounds and five blocks. Tyree Appleby had a big game in multiple areas, going for a team-best 13 points, seven assists and three steals.

Mann and Noah Locke added 12 and 11 points respectively, while Ques Glover put up 10 points and two steals against his hometown school.

While Tennessee seemed to be themselves defensively, Florida had really stepped it up on the defensive front, which even had Tre Mann recording a block. The Gators had hot hands in the first few minutes, getting stop after stop. This included a steal and layup by Appleby and a forced shot clock violation.

The Vols got the first bucket of the game, but soon went 1-6 with five straight misses. Tennessee pulled back within one though after a three from Santiago Vescovi, making the game 5-6.

For the first eight minutes, Florida was not relying on its three-ball and it seemed to work wonders. Not to mention they had 12 rebounds to Tennessee’s seven. With nine minutes left in the half though, Mann got called for his second foul and had to be taken out.

However, Locke stepped up in Mann’s absence. He hit a huge three to put Florida up by seven and a jumper to make it 23-14. With five minutes left, the Vols went on a 6-0 run to close the gap 27-20.

With just over a minute to play, Payne got a huge dunk from Appleby followed by a Niels Lane jumper to put the Gators up 36-27.

The Vols came out of halftime hot, bringing Florida’s lead down to seven. But the Gators used the timeout to stay hot too and quickly had a 45-33 lead. Out of a timeout, Locke picked up a big layup and was fouled on the shot.

At the first media timeout, the Gators were up on boards 31-18l, which is huge against a team who came in at 60th in the nation for offensive rebounds.  Soon Florida found themselves with their biggest lead of the game, 18.

When Tennessee went on an 11-2 run, the Gators were quick to take a timeout and regroup. And while it didn’t seem to do much at first, the Gators found that rhythm they had in the first and went on an 8-0 run to take their lead to 19.

With just over three minutes to play, the Gators had recovered from their previous stumble fully. They had a 23 point lead and it seemed nothing could stop them now.

Finally back on track, the Gators will head on the road to take on Georgia on January 23rd. Tipoff is set for 2 p.m.

In front of a sea of pink at the Stephen C. O’Connell Center, the fourth …