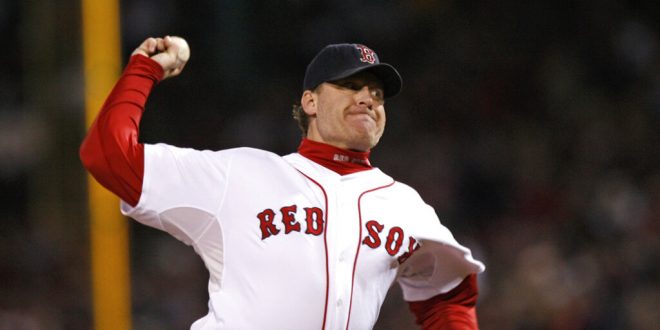 FILE - In this Oct. 25, 2007, file photo, Boston Red Sox's Curt Schilling pitches against the Colorado Rockies in Game 2 of the baseball World Series at Fenway Park in Boston. Like many baseball writers, C. Trent Rosecrans viewed the Hall of Fame vote as a labor of love. The results of the 2021 vote will be announced Tuesday, Jan. 26, 2021, and Rosecrans was not alone in finding the task particularly agonizing this time around. With Schilling's candidacy now front and center — and Barry Bonds and Roger Clemens still on the ballot as well — voters have had to consider how much a player’s off-field behavior should affect his Hall of Fame chances. (AP Photo/Kathy Willens, File)

The 2021 National Baseball Hall of Fame is set to unveil it’s newest class tonight. However, the biggest question is not who will get in but if anyone will get in. In order to be inducted, one must receive 75 percent of votes from the Baseball Writers Association of America. Many believe this could be the first year since 2013 where no one meets the criteria.

While it is looking increasingly more unlikely that anyone gets in, there are a few candidates that can receive a 75 percent vote. The most intriguing contenders — Barry Bonds and Roger Clemens — are clouded by PED scandals. Polling at around 72 percent on public ballots, both Clemens and Bonds are on the outside looking in of induction. The figure is an increase from last year’s 61 percent, but time is quickly fading as both enter their ninth year on the ballot.

There is no question that Bonds and Clemens will have a difficult time getting in tonight and ever.

As for the man who has the best chance at induction, it’s six-time All-Star Curt Schilling. The former Baltimore Oriole (1988-1990), Houston Astro (1991), Philadelphia Phillie (1992-2000), Arizona Diamondback (2000-2003), and Boston Red Sox (2004-2007), is a three-time World Series champion and one-time NLCS MVP amongst a slew of other accolades. Kurkjian spoke extensively on why Schilling will be getting his vote.

Few are doubting whether Schilling’s resume is Hall of Fame-worthy. Although, his outspokenness on Twitter has given voters and baseball fans pause. Getting a bid into the National Baseball Hall of Fame is no easy task and character concerns can play a role. Regardless, Schillings numbers speak for themselves and could just be enough to warrant induction into the prestigious Hall of Fame.

Why No One Will Get Elected

While Schilling is this year’s biggest threat for induction, — his public polling figure is teetering on the brink 75 percent — the expectation is that his voting declines this year. Last year, Schilling garnered nearly 70 percent of the votes, and was just 20 votes shy of election.

With no sure-fire candidates and no darkhorse contenders that can grab the needed 75 percent, an empty class will likely be the end result. Tim Kurkjian believes just that.

Last year’s risers, first baseman Todd Helton, outfielder Andruw Jones, and pitcher Billy Wagner will likely see continued increases again this year. However, all three still have too many votes to make up to get the nod this year. It appears a repeat of 2013’s empty ballot is likely in baseball’s very near future.

The ballots will be unveiled tonight at 6 p.m. on MLB Network.

Will Levenson is a Journalism and Sports Media major at UF. He produces daily shows for WRUF, including "Sport Scene with Steve Russell," "Harp on Sports," and "The Tailgate." In addition, Will provides weekly sports updates for WUFT News and radio Sportscenters for WRUF radio. Will has been a writer at ESPN Gainesville since September 2019.
@BigWillLevenson
Previous Magic Ends Skid Behind Vucevic’s 28
Next No. 12 Missouri Looks to Keep Rolling Against Auburn