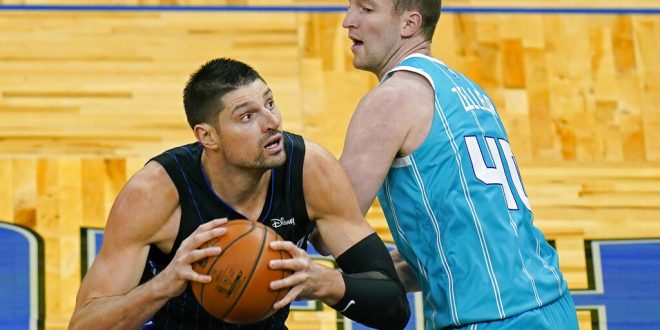 Orlando Magic center Nikola Vucevic, left, looks for a shot as he gets around Charlotte Hornets center Cody Zeller (40) during the second half of an NBA basketball game, Monday, Jan. 25, 2021, in Orlando, Fla. (AP Photo/John Raoux)

On the second night of their back-to-back series, the Magic bounced back and came out on top thanks to another big night from Nikola Vucevic.

After starting out sluggishly facing an 11-point deficit at the end of the first quarter, the Magic hit their stride. From there they outscored the Hornets 98-78 over the final three quarters.

Cole Anthony scored a career-high 21 points as he continues to take on more responsibility in light of Markelle Fultz’s season-ending ACL tear earlier this month.

Magic head coach (and former Hornets coach) Steve Clifford praised Anthony’s leadership and performances on both ends of the court after the game.

“He does as much extra as he can,” said Clifford  His team has been needing that kind of effort this month as last night’s win was only the Magic’s fourth win in 2021.

As for Vucevic, his performance was his 13th double-double of the early season, good for the fourth-most in the league.

The Magic will look to build on Monday’s win when they take on De’Aaron Fox and the Sacramento Kings (6-10) at home Wednesday night at 7.

Caleb Wiegandt is a first-year Journalism student on the Sports and Media track in the University of Florida's College of Journalism and Communications. He has previous bylines in USA Today, Yahoo Finance, and The Louisville Courier-Journal before arriving at ESPN Gainesville. Caleb is a proud graduate of Holy Cross High School in southwest Louisville, Kentucky, where he was born and raised. You can reach Caleb at cwiegandt@ufl.edu.
@@CalebWiegandt
Previous Florida Football Hires Jules Montinar
Next National Baseball Hall of Fame to Announce 2021 Inductees