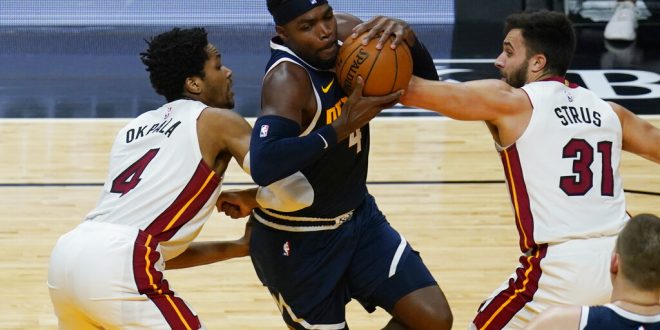 Miami on four-game losing streak, falls to the Denver 109-82

The Miami Heat fell to the Denver Nuggets 109-82 on Wednesday night and are now on a four-game losing streak. The Heat are (6-11), falling five games below .500.

Miami did not reach the double figures until after ten minutes of play. They started the game 0-13 from behind the arc.

The Heat ended the first quarter with just 12 points on the scoreboard, making it its lowest scoring quarter this season. Their 15 missed three-pointers tied an NBA record for a single quarter in a regular season.

Part of this struggle could be brought by the absence of NBA All-Star Jimmy Butler. Butler has not played since Jan. 9 due to COVID-19 health and safety protocols. He shot the ball around a few hours before tipoff and then left the court with head coach Erik Spoelstra. Butler has been cleared to play, but has been restricted to play for conditioning purposes.

Miami also entered the court without second-year point guard Tyler Herro. The team announced this through their social media a few hours prior the game.

He has now missed seven games in a row after last stepping on the court on Jan. 14 against the 76ers.

And if that wasn’t enough, the Heat also played without guard Goran Dragic who was ruled out due to a groin injury.

UPDATE: Tyler Herro (neck) has been ruled out.

The lack of star players on the court is likely the reason for the team’s recent struggles. However, Spoelstra has hope for Butler’s return for Thursday’s game against the Los Angeles Clippers.

A 25 point lead coming of of halftime might’ve made Denver feel a little bit too comfortable. Either that or the Heat finally started to see their shots fall.

Either way, Miami found a way to outscore the Nuggets 32-16 in the third quarter. This cut the Denver lead, putting the Heat back in the game down 74-65.

Miami also found a way to quickly cut the lead to seven at the beginning of the fourth quarter.

But the Nuggets got their spark back, and quickly regained their lead once again. This can be attributed to Michael Porter Jr. who made key shots during this frame to help Denver extend their lead again. Porter Jr. ended the game with 17 points, five rebounds and an assist.

Another Nuggets player that was key in this Denver victory was Nikola Jokić who ended the game with 21 points, 11 rebounds and three assists.

The 6’11” power forward has had an outstanding season so far. He is averaging 25.2 points this season along with 11.8 rebounds and 8.9 assists.

“He’s playing at an MVP level right now, and he’s doing it in every facet of the game,” Spoelstra said.

In addition, Spoelstra commented on his own player, Bam Adebayo, who finished the game with 15 points.

“When I came into the league in ’95, I think the two centers that are playing tonight in many ways you wouldn’t have been able to wrap your mind around that. Both centers in this game tonight are point guards,” Spoelstra said.

Miami will try once again to break the losing streak. They will stay home as they prepare to host the Clippers on Jan. 28. Tipoff for this game is set for 8 p.m.

On the other hand, the Denver Nuggets will finish their five-game road trip in San Antonio. They will face the Spurs on Jan. 29 and tipoff is set for 8:30 p.m.

Camila is a senior at the University of Florida, who served as a beat writer for the women's basketball team from 2019 until the 2021 season. She was also a beat writer for the Gators football team during the 2020 season. Camila is also WUFT's news director as well as a sports reporter/anchor.
@CamilaMaffuz
Previous Eastside Boys Soccer Ties on Senior Night
Next Orlando Magic fall short against the Sacramento Kings