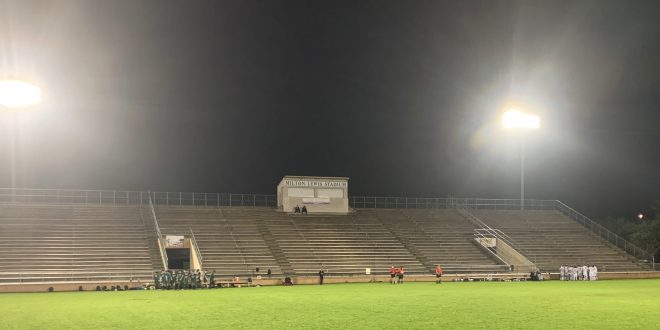 Story by: Victoria Siwek and Chris Will

Forest High School started the game out strong, testing Eastside’s defense, which proved to be resilient. The backline, led by senior defender, Riley Trax, had multiple clearances in the first half to keep the game even. However, the Forest defense held a solid, high line, allowing very few chances for Eastside forwards to break through.

Forest held the majority of possession, but with 10 minutes left in the first half, the momentum shifted. Eastside had a sudden burst of energy, resulting in multiple free-kicks and corners, but none that reached the back of the net. Eastside fans were filled with suspense as their team created chances.

Starting the second half, both teams had equal opportunities to score. With 30 minutes left, Forest junior goalkeeper, Seth Owens, had a huge save on a 1v1 breakaway to keep his team in the game. Similar to the first half, both teams’ defenses were tough to crack.

Forest had a few opportunities in the second half, including a shot by senior Sebastian Arango, which struck the post. But, Eastside fought back, proving to be a force to be reckoned with. Again, Eastside had a surge of energy in the final minutes of the second half, but it wasn’t enough to win.

Both Eastside and Forest fought hard, resulting in a 0-0 tie.

@RowdyEHSRams Boys Soccer ends their Senior Night with a 0-0 tie that didn’t lack some excitement at the end.
That’s it for @victoriasiwekk and I with the live updates

Eastside coach Greg Sawyer said he is very proud of the team, especially the seniors.

“I think it was a fantastic game. Everybody played really, really well.”

Sawyer is pleased with his team for being able to dig deep in the final minutes of each half, which he credits to the conditioning they do at practice.

The two teams met earlier in the season, which resulted in a 3-2 Eastside loss. Sawyer is overjoyed with his boys for putting in their maximum effort to keep the game even at 0.

Going into the playoffs, this tie gives Eastside the boost of confidence they need to make a deep run.

Previous No.1 Florida Faces No.24 Missouri
Next Miami on four-game losing streak, falls to the Denver 109-82