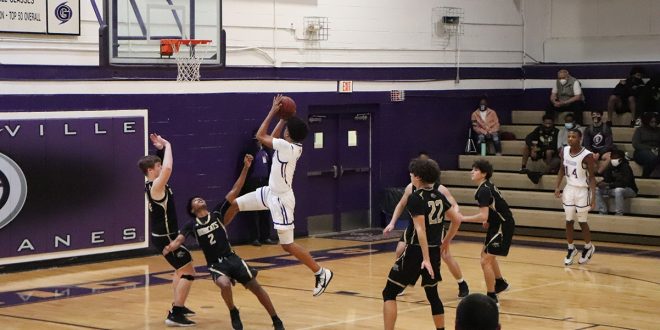 Justus Wilburn takes a shot in the first quarter. Photo by Faith Buckley

The Gainesville high school boys’ basketball team lost to Buchholz High School 65-61 on Friday.  The loss made for a three-game losing streak. It’s their eighth loss this season.

The Canes’ didn’t go down without a fight, however. The small margin speaks for itself.

The game was lively, with poms poms always ruffling, strong cheers being shouted, and riled up fans shouting chants. The players were enthusiastic for the game to come.

The action started with guard Theo Stevens. He was the first Cane to score on the night, and rightfully so. Stevens practically lived under the hoop in the game’s starting eight minutes.

The energy was matched by guard Justus Wilburn, who left nothing up to chance in the game. Wilburn was another attention grabber, being everywhere and anywhere on the court. He scored at least three times in the game and was the go-to player for free throws. Basketball appears to come as second nature to the senior between his stellar shots and defense.

Gainesville’s hunger bawled as the Bobcats sat a comfortable distance away in points. The Cane’s trailed by eight points at the end of the first quarter.

The Hurricanes were still driven to push.

Forward Kameren Wright is the poster child for such determination. His strong facial expressions screamed success and it showed in gameplay.

Wright scored at least once in every quarter and was in every part of the court manageable, constantly drawing fans’ attention as he raced from one side to the other for the ball. His energy as a freshman is astonishing.

The first half ended at 33-22 and the Canes were ready to bring it on for round two.

The team scored 19 points in the third quarter and didn’t look back.

Graham shined on both sides of the court. He took strategic steps in defensive plays and appeared to be two steps ahead of the competition while blocking. Graham brought the game 48-38.

Wright kept up his great performance with two successful shots in the third quarter.

The last quarter was primarily dominated by guard Saladeen Westbrook. The sophomore constantly charged across the court with high energy and scored three times in the final eight minutes. Westbrook said the fourth quarter was the highlight of his night, as he quickly began heating up with his points.

The game ended 65-61. The loss was a hard one, but the Canes proved to be a stacked team with a bright future.

“I feel like we did decent,” Westbrook said. “We have to get better on the defense.”

The Canes travel to Ocala to take on Vanguard high school at 7:30 p.m. on Saturday night.