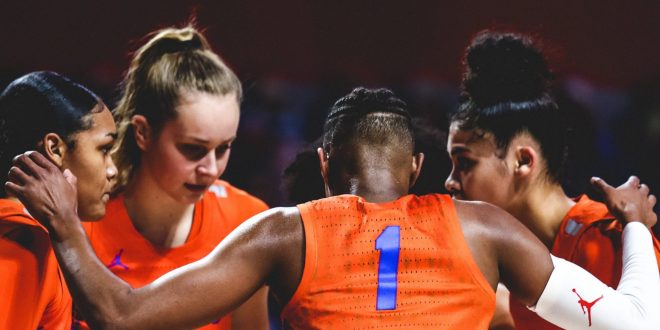 Florida’s women’s basketball team lost against the 20th-ranked Tennessee Lady Vols 79-65 on the road. They are now 9-8 on the season and 2-7 in conference play.

This is now the second conference game in a row that the Gators have dropped.

The first quarter ended with a close game, as the Gators were on top 21-19. Their connection with the basket decreased as they only managed to score 10 points in the second frame.

Florida brought back hopes on the third frame as they were able to outscore the Lady Vols 23 to 20. But Tennessee sealed the deal on the fourth, outscoring the Gators, 21-11.

The Lady Vol’s win can be accredited to their productive defense. They were able to block the Gators 14 times, compared to Florida’s three blocks.

They also outsized the Gators as they got 37 defensive rebounds.

This was the second road game in which Kelly Rae Finley stepped into coach the Gators. The team announced a few hours before the game that head coach Cam Newbauer would not coach the team due to health and safety guidelines.

Two Gators give it their all

Despite the loss, there were two Gators who left it all on the court.

Kiara Smith and sophomore Lavender Briggs both scored 23 points for Florida. Smith actually finished with a double-double after chipping in 10 rebounds. This was complemented with five assists from the redshirt senior.

Briggs on the other hand came one-rebound short of achieving the double-double. She finished the game with nine rebounds and two assists.

Smith and Briggs were the only two Gators to get to the double digits. The closest one was freshman Brynn Farrell who finished the game with six points.

Only three more Gators scored during this game. Jordyn Merritt and Danielle Rainey both chipped in five points while Floor Toonders contributed three.

The Florida Gators will make another stop on the road as they will travel to New Orleans to face the LSU Tigers. The game is set for Feb. 11 and tipoff is set for 7 p.m.

As for the Lady Vols, they will go on the road to face 21st-ranked Mississippi State. Their game is scheduled for Feb. 4 and tipoff is set for 8 p.m.

Camila is a senior at the University of Florida, who served as a beat writer for the women's basketball team from 2019 until the 2021 season. She was also a beat writer for the Gators football team during the 2020 season. Camila is also WUFT's news director as well as a sports reporter/anchor.
@CamilaMaffuz
Previous Gainesville falls short to Buchholz
Next Pat Dooley’s Back Nine: February 1