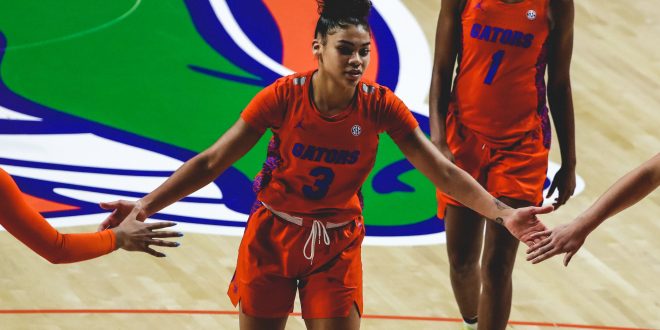 Gators Women’s Basketball in Knoxville To Face No.20 Tennessee Vols

The Florida women’s basketball team is on the road this weekend heading to Knoxville, Tennessee to take on 20th ranked Lady Volunteers.

Florida women’s basketball looks for its third win of SEC play. The Gators are coming off a tough 61-58 loss home against the Missouri Tigers. The Gators were without their head coach Cam Newbauer who was out due to health and safety protocols. Assistant head coach, Kelly Rae Finley took in his position.

The Gators started off slowly in their match up against the Tigers.  Florida’s dynamic duo of Lavender Briggs and Kiki Smith combined for only four points and as a whole the Gator team scored only 21 points in the first half of the game.

Sophomore Lavender Briggs leads the Gators in scoring at 21.8 points per game and she ended with 19 points and 11 rebounds against Missouri, giving her a third double-double on the season.

Kiki smith followed alongside her scoring 14 points with six rebounds. Smith also leads the team in assists and steals.

The Tennessee Volunteers enter this match up 5-1 in SEC play while standing at number 20 in the AP Top 25 poll.  Prior to this match up against Florida, the Vols hosted the Ole Miss Rebels where they struggled but ended up winning 68-67. The Gators defeated the Rebels 78-68 earlier this year by comparison.

Last time these two teams met was last season when the Lady Vols took down the Gators 70-58. The last time the Gators took a win in Knoxville was 2016 when Tennessee was ranked number 12 in the country and the Gators pulled out the 74-66 win.

Tip off for this match up is set for 2p.m, Sunday.

Rounding out the homestand when the Gators come to play.