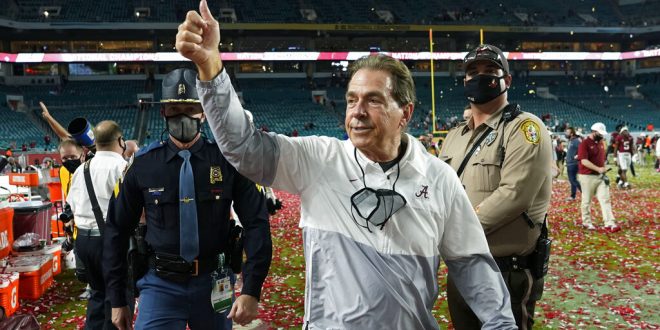 Nick Saban is a recruiting wizard.

It became even more obvious Wednesday after Alabama officially landed the No. 1 recruiting class. In fact, the Crimson Tide came out on top in a college football recruiting cycle for the ninth time in 11 years.

Entering the 2021 National Signing Day, Alabama led all schools with 325.46 points according to the 247Sports Composite. That total easily eclipsed second-place Ohio State’s 309.46.

Even more impressively, Alabama finished the cycle with 327.91 points. As a result, the Crimson Tide locked up the highest-rated recruiting class in college football history.

Breaking down the 2021 class

By National Signing Day, Alabama had already inked 13 of the country’s best 90 football players. But it didn’t stop there. It added two more top-90 players: Camar Wheaton and Terrion Arnold.

Wheaton is a five-star running back and almost flipped to Oklahoma, but stayed true to Alabama when the time came. Then, four-star defensive back Arnold gave the Crimson Tide 15 of the nation’s top 90 recruits. He chose Alabama over Florida and Georgia.

Alabama just added to their record-breaking class with the commitment of Top-50 safety Terrion Arnold! The Florida-native chose the Tide over finalists Florida and Georgia.

Continue to stay glued to our LIVE commitment tracker:https://t.co/1sowU6iODU pic.twitter.com/acVHqgOdcg

Of those 15, there are seven five-star recruits joining the team. Additionally, Alabama raked in 16 four-star and four three-star prospects.

Offensively, this class is loaded. JC Latham and Tommy Brockermeyer head to Tuscaloosa as the top two offensive tackles in their class. To complete the offensive line, Alabama got the No. 2 guard in Terrence Ferguson and No. 1 center in James Brockermeyer.

In regard to skill players, the Crimson Tide added four of the top 10 receivers in Jacorey Brooks, Agiye Hall, Christian Leary and JoJo Earlre. They will complement Wheaton to help create another dynamic Alabama offense.

On the other side of the ball, they signed the No. 1 cornerback in Ga’Quincy McKinstry, the top weak-side defensive end in Dallas Turner and the No. 3 defensive tackle in Damon Payne. Finally, Alabama collected two top-10 linebackers in Deontae Lawson and Kendrick Blackshire.

Saban passes Meyer and the Gators

With the new highest-rated college recruiting class ever, Saban and Alabama topped Urban Meyer and the Florida Gators. Meyer’s class of 2010 reached 324.62 points, but the new best mark beat that by three.

And Saban and Alabama might not be done. Five-star defensive end J.T. Tuimoloau is the best player in the nation according to 247Sports. Alabama and Ohio State seem to be the favorites to land him.