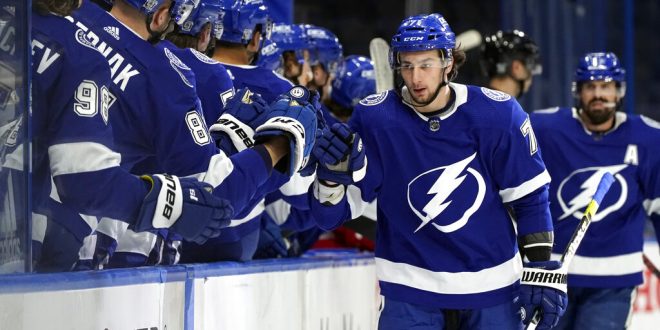 As good as they have looked in the opening stages of their Stanley Cup defense tour, the Lightning had arguably the most electric quarter of the young NHL season last night.

Tampa Bay (6-1-1) stormed out of the gates and never looked back, blitzing the Detroit Red Wings (2-7-2) 5-1 in the first game of a back-to-back mini series between division opponents.

The Lightning took advantage of the NHL’s fourth-worst defense as goals by Victor Hedman, Anthony Cirelli and Ryan McDonagh all came within the opening five minutes of play.

Tampa held on to their lead thanks to 15 saves from goalkeeper Andrei Vasilevskiy and stellar play all around from the league’s best defense.

Just past the minute and a half mark in the first, Hedman got the scoring going, swooping across the right circle after a feed from Tyler Johnson.

Not long after that, Anthony Cirelli added to the lead on assist from Luke Schenn and Hedman in transition.

Cirelli on the rebound 💪 pic.twitter.com/0TRao63elX

Another two minutes passed, and this time it was McDonagh finding the back of the net through the middle of the right circle, assists to Barclay Goodrow and Blake Coleman.

The early flurry of goals led to Red Wings coach Jeff Blashilll benching goalkeeper Thomas Greiss in favor of Calvin Pickard after a mere 5:36 on the ice.

Adding To The Lead

The second period brought more success for the Lightning. 7:25 into the 2nd period came Tampa’s fourth goal from Brayden Point on passes from Ondrej Palat and Steven Stamkos.

It would take until almost halfway through the 2nd period for Anthony Mantha to put a band aid on the bullet hole, scoring and cutting the Lightning lead to 4-1.

Alex Killorn’s goal from Blake Coleman and Mikhail Sergachev would add one more for good measure two minutes later, putting the nail in the coffin for Tampa Bay. With a 5-1 lead, the Lightning secured the victory. No further scoring occurred.

With his two assists on the night, Lightning center, Coleman, achieved a milestone Wednesday with his 100th career point. Furthermore, Coleman scored a majority of those points in his time with the New Jersey Devils. However, he played a definitive role in the Bolt’s rout last night.

The Lightning will look to sweep the two-game series against Detroit and make it three wins in a row tomorrow night at Amalie Arena. Coverage begins at 7 p.m. on ESPN+ online or on the ESPN app.

Caleb Wiegandt is a first-year Journalism student on the Sports and Media track in the University of Florida's College of Journalism and Communications. He has previous bylines in USA Today, Yahoo Finance, and The Louisville Courier-Journal before arriving at ESPN Gainesville. Caleb is a proud graduate of Holy Cross High School in southwest Louisville, Kentucky, where he was born and raised. You can reach Caleb at cwiegandt@ufl.edu.
@@CalebWiegandt
Previous Saban, Alabama ink best college football recruiting class of all-time
Next Former Florida Gator Coach Will Muschamp Joins Georgia’s Coaching Staff 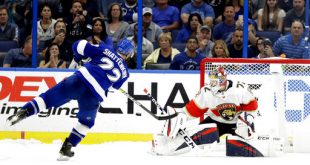