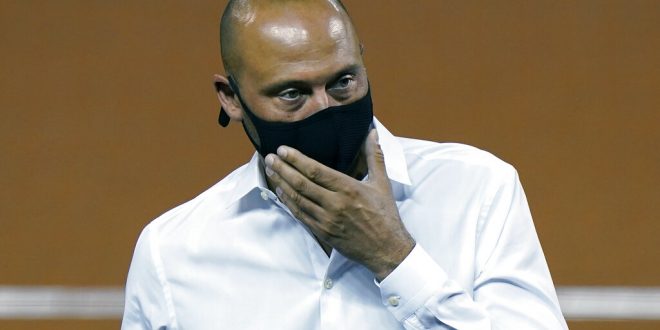 FILE - Miami Marlins CEO Derek Jeter is shown before the start of a baseball game between the Marlins and the Philadelphia Phillies in Miami, in this Saturday, Sept. 12, 2020, file photo. The attendance-challenged Marlins plan to have fans at home games, although crowds will initially be limited to about 25% of capacity. That would mean up to around 9,300 spectators at the 37,446-seat ballpark. “We look forward to having the opportunity to have fans come back to our ballpark,” CEO Derek Jeter said Monday, Feb. 15, 2021. (AP Photo/Wilfredo Lee, File)

Since taking over as CEO for the Miami Marlins in August 2017, former Yankee great Derek Jeter has brought a winning culture to the franchise. Upon entering the franchise, Jeter was forced to completely reboot an organization that was left in shambles from the previous regime.

Building Toward a Bright Future

As one might expect for a rebuilding team, Jeter’s first two seasons with team were abysmal at best. The team averaged a .375 winning percentage from 2018-2019, losing an NL-worst 105 games in 2019. But 2020 was encouraging. Miami finished second in the NL East with a 31-29 record. The team qualified for the Postseason for the first time since 2003. In fact, the Marlins had reached the Postseason just twice prior in franchise history (1997, 2003), winning the World Series on both trips.

Miami failed to repeat such success, falling to the Atlanta Braves in the NL Divisional round. Still, the Marlins became just the second team in MLB history to make the playoffs one year after losing over 100 games, joining the 2017 Minnesota Twins.

The strides made last season, can help to preserve and advance Miami’s newfound winning culture. Jeter says the confidence it instilled in the players was the biggest benefit.

Despite the progression, Jeter admitted that he is still not satisfied.

Rebounding from an Unusual 2020 Season

Jeter acknowledged the adversity that his team and the rest of the league faced last season due to the COVID-19 pandemic. With the virus continuing to ravage our nation, many of those challenges won’t go away. But this season, the league is better prepared for the challenges that lie ahead. Jeter hopes the 2021 season avoids the hurdles experienced last year.

All 30 teams must now readjust to a full 162-game schedule. In a sense, it will be a near-return to normalcy. With it, the Marlins hope they can return to the success found in the early years of the club.

Jeter understands that patience is vital, especially in this uncertain climate. Another obstacle teams must hurdle is patience with the Minor League system. 2020’s Minor League season was shelved due to COVID-19, meaning it’s players are a full year behind. Jeter hopes to get them back on the field quickly and to give them as many opportunities as possible. Increased reps for players and patience from management is key in helping return the system back to form.

Jeter, like most, hopes for a return to normalcy. He confirmed that a limited number of fans will be allowed to attend games when the season begins in April. He hopes that the number grows as the season progresses and as our crippled nation begins to recover. Yet health and safety remains his and the team’s top priority.

Challenges That Lie Ahead

Despite this newfound winning culture, the Marlins know that success in the NL East is no easy task. The Marlins must compete against a hungry and ascending Atlanta Braves team that was just a game away from a World Series birth a season ago. All Atlanta did was improve during the offseason.

Bringing in pitchers Charlie Morton and Drew Smyly add depth to a rotation that needed it. Maybe the Braves’ biggest move was keeping one of their own, resigning outfielder Marcell Ozuna to a mega $65 million contract. The Braves are major threat not only in the NL East, but in the National League as a wh0le.

The rest of the division saw offseason improvement from both the New York Mets and Philadelphia Phillies as well.

The Mets, meanwhile, made a blockbuster move trading for star short stop Francisco Lindor from the Indians.

The Miami Marlins are led by a cast of quality starting pitchers. The group’s top three — Sixto Sanchez, Sandy Alcantara, and Pablo Lopez — combine for a promising group of young arms that can help lead the Marlins back to the postseason.

For now, however, Jeter understands that the big picture is most important.

This team is full of young players that need time to grow and develop. Most pundits aren’t expecting much from Miami in 2021, but many in the organization are looking for the team’s stars to grow. Jeter has laid the foundation for the franchise. Despite a tough first two seasons, the team showed it’s potential last season. They must build on that.

“It’s gonna take some time,” Jeter said. Patience has been the theme for this team since Jeter’s arrival. That shall remain for this year and beyond. But the hope remains. The belief remains. With Jeter’s leadership, and the young stars in place, the Miami Marlins can soon return back to a contending level.

Will Levenson is a Journalism and Sports Media major at UF. He produces daily shows for WRUF, including "Sport Scene with Steve Russell," "Harp on Sports," and "The Tailgate." In addition, Will provides weekly sports updates for WUFT News and radio Sportscenters for WRUF radio. Will has been a writer at ESPN Gainesville since September 2019.
@BigWillLevenson
Previous South Carolina Faces No. 19 Vols
Next UCF Hires Gus Malzahn To $11.5 Million Deal