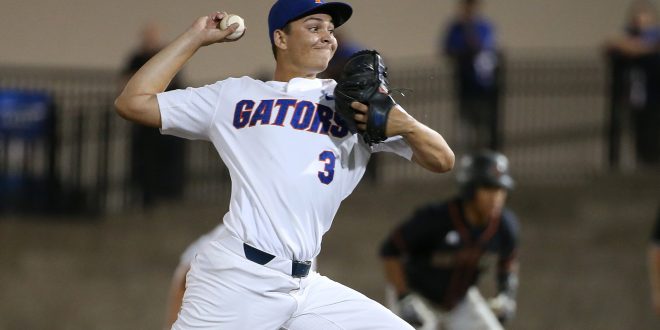 during the Gators' 8-7 win against the Florida A&M Rattlers on Tuesday, May 2, 2017 at McKethan Stadium in Gainesville, FL / UAA Communications photo by Tim Casey

Despite being just 65 miles down the road, the Gators and the Osprey’s from North Florida have not met for a game since 2019. The two will meet on Tuesday and Wednesday in a home and away series beginning in Jacksonville with the first pitch set at 6:05 p.m. at Dusty Rhodes Field. UNF will turn around and hit the road on Wednesday in their first-ever appearance at the Florida Ballpark.

Both teams are coming into the mid-week series a bit un-settled, sporting a 1-2 record. Florida dropped their opening weekend series to No.21 Miami after three high-scoring stunners. Similarly, UNF started out hot against No. 24, clinching Friday night’s win over the Seminoles, 7-4. But, the Ospreys dropped the following two games to lose the series.

Currently, Florida holds the all-time series meeting 13-7. However, UNF did claim the last victory in 2019 when they took down the Gators 7-1.

Taking the mound for the Gators on Tuesday will be right-handed pitcher Garrett Milchin.  Milchin’s journey with the Gators has been anything but easy. His last appearance came in Omaha in 2017 where he pulled himself off the mound following an injury. He had suffered a UCL tear and underwent Tommy John surgery before suffering the same injury again in 2019. Being just one of two players present on the 2017 championship team, Milchin has had his taste of success. But, an even heavier dose of adversity. Tuesday will mark a milestone in his journey back to the mound and the start of a new page in his career. He is most admired by his teammates and staff for his attitude and leadership. It will be an inspirational moment and a testament to overcoming adversity as the righty takes the mound.

Florida will look to improve after many uncharacteristic tendencies this past weekend, especially on the mound. The Gator’s pitching staff allowed 25 walks over the course of the series. UF’s bullpen was depleted quickly as well which could play a factor early on in this mid-week series.