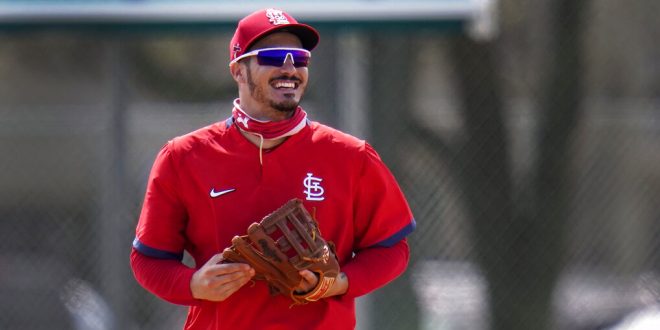 Nolan Arenado spent the last eight seasons swinging for the Rocky Mountains as a member of the Colorado Rockies.

But now, he’ll be going for the Gateway Arch.

The five-time All Star was traded to the St. Louis Cardinals on Feb. 1 for a package that included five players. Arenado hit nearly 300 home runs and was a Gold Glover all eight seasons in Denver. He also received a Silver Slugger four times.

Now, he will join a Cardinals lineup that includes first baseman Paul Goldschmidt and second baseman Paul DeJong. Arenado met with the media after arriving at Cardinals Spring Training in Jupiter, Fla.

Position players were not required to arrive for Spring Training until Feb. 22, but Arenado arrived in the middle of last week.

The move was certainly a big change for Arenado, who spent eight seasons in the Rockies organization.

The Cardinals certainly come into the season with high expectations. In the shortened 60 game season last year, St. Louis went 30-28, giving it the No. 5 seed in the National League playoffs. It would later lose in three games in the Wild Card Round to San Diego. However, The Cardinals’ offense struggled in 2020. They were last in baseball in home runs and second to last in hits. Arenado is expected to provide a shot of adrenalin to the offense. He spoke about joining his new team.

He will join an infield that includes Matt Carpenter. Arenado is looking forward to playing with the three-time All-Star.

Joining a New Team During a Pandemic

Adjusting to a new situation is hard enough under normal circumstances. It could even harder during a pandemic, but Arenado hasn’t had any issues and said it feels almost like normal.

Arenado also hasn’t had any issues fitting in with his new teammates and coaches.

Haters will say it's photoshopped. pic.twitter.com/mtsecr3mdN

Arenado’s first regular season game in a Cardinals uniform will be on April 1 in Cincinnati. The Cardinals will face stiff competition, just in the National League, such as the defending champion Dodgers and the reloaded Padres.