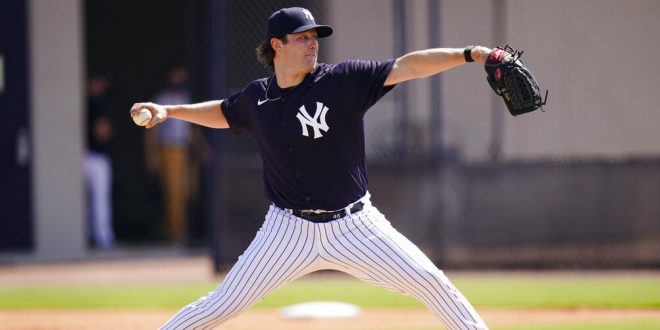 Ace pitcher Gerrit Cole has been enjoying himself as the New York Yankees are easing back into the Spring.

Getting back to business as usual

Cole has been in great shape for a long time and said he’s been putting a lot of focus into his health. His mechanics are still in a good spot, but Cole never really deviates far from the core fundamentals of the way he throws. As for Spring training, Cole is staying focused in the quiet atmosphere.

Ultimately, Cole knows each player on the roster needs to take care of themselves when preparing for performing at the highest level. But the environment the New York Yankees have created works great in these terms.

Cole commented on pitching coach Matt Blake working with the rotation to perfect their craft, saying, “When they learn something, we should be sharing it with our teammates and we should be moving along the journey with each other.”

Cole added that each man throughout training has been working with the appropriate people to build their pitch repertoire. Each pitcher is unique in terms of how they prepare and how they throw. Cole himself has taken responsibility as a leader on the Yankees’ roster and in the pitching rotation.

“I am prepared for the day to do my work and I just feel blessed to be in a position where I can talk about conversations I have had with other veteran pitchers and players before. And that is kind of our duty, to pass on that knowledge to each other,” Cole said.

The New York Yankees will need to make some changes around the roster going into this season. One place to start is the push for Cole to continue working with Yankees starting catcher Gary Sanchez.

Although Cole does not necessarily need to reinvent himself as a pitcher, he has not produced his best work with Sanchez behind the plate. Cole said he is hopeful Sanchez will take a step forward defensively this season.

Sanchez has remained super focused in camp and strong in communicating to the pitchers in the bull pens, showing great promise for this season. Cole believes Sanchez appears to be on the right track and taking steps forward, which will hopefully get this battery on the same page this year.