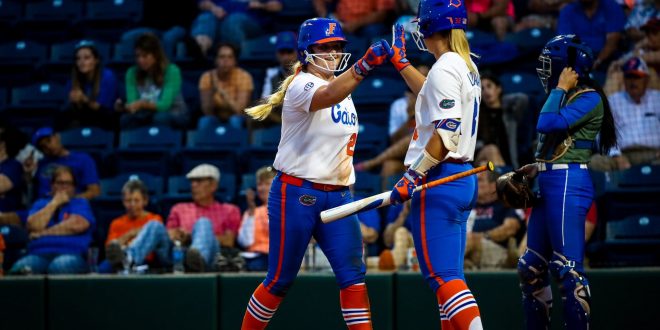 Dominant across the board

While the scoreboard would make one think UNF never got a handle in this game, they almost jumped out to a 2-0 lead in the first inning. With a runner on second, UNF’s Shannon Glover forced Gators left fielder Jaimie Hoover to the warning track to catch the deep fly.

With no runs scored in the top of the first, the Gators made sure to make their presence felt in this game. Julia Cottrill singled to score Hannah Adams and Avery Goelz reached on a UNF error, allowing Charla Echols to cross the plate.

The Gators never looked back.

Defensively, the Gators locked down over the next four innings. The pitching combination of Natalie Lugo and Rylee Trlicek combined to allow two hits to the Ospreys. Lugo picked up credit for the win, throwing 4.0 innings with three strikeouts. Trlicek pitched only the fifth inning but threw an effortless 1-2-3 inning. The Gators also committed no errors for the third straight game.

In the box, it was a team effort across the board. Five Gators had multi-hit games. As a team, Tim Walton’s squad mustered 11 hits.

Outside the flashy numbers, the Gators excelled at putting the bat on the ball and forcing the Ospreys to make plays. The four UNF pitchers combined for just three strikeouts, meaning if the Ospreys were getting outs, it had to happen in the field. The Gators’ tenacity at the plate contributed to two UNF errors in the field, both of which directly yielded unearned runs.

In his press conference on Wednesday, Gators Head Coach Tim Walton said Kendyl Lindaman is just gaining confidence and finding her groove in the box. If Thursday’s performance is any indication, she is finding her groove.

The Preseason All-SEC selection was the designated player for the Gators today. In her three plate appearances, Lindaman went 2-3 with two doubles and two RBIs. In her one unsuccessful at-bat, she chased UNF RF Logan Jackson to the warning track for what would have been her second home run of the season.

Hannah Adams, Charla Echols and Cheyenne Lindsey all continued their hot starts to the season, combining to go 7-11 at the plate for three RBIs.

Looking back, looking ahead

Florida sits at 9-0 this season, and they carry statistics that embody a Women’s College World Series challenger.

Florida is tied for second in the nation in shutouts (five), the combined ERA for the Gator pitchers is 0.86 and they are holding opponents batting average to .148.

Offensively, Thursday’s 11-hit performance was the fifth time the Gators have reached double-digits in hits in a game. The Gators are averaging just under seven runs per game.

The Gators look to make it 10 wins from 10 games when they take on Louisville on Saturday. Saturday’s game precedes a Sunday doubleheader against Louisville again then McNeese State.

Picking up a win on Saturday would be the second time in three years the Gators started the season on a 10-game winning streak. In 2019, the Gators actually started 18-0.

Nevertheless, starting 9-0 is a strong start to a team that aims to be in the mix when the race for Oklahoma City begins.

Originally from Seminole in the Tampa Bay area, Kyle is a contributor for ESPN Gainesville as well as local NPR and PBS affiliate WUFT. Kyle wants to get into sports with a lofty dream of being a sports broadcaster. He was raised playing soccer and baseball while watching hockey and football, so the knowledge about various sports is fairly extensive.
@KyleFanslerUF
Previous Florida Volleyball Sweeps Tennessee in 3 Sets
Next No. 1 Gators Enter Final Home Meet Against No. 18 Auburn

On Friday, August. 26, Florida took the courts against the UNF Ospreys in women’s volleyball …