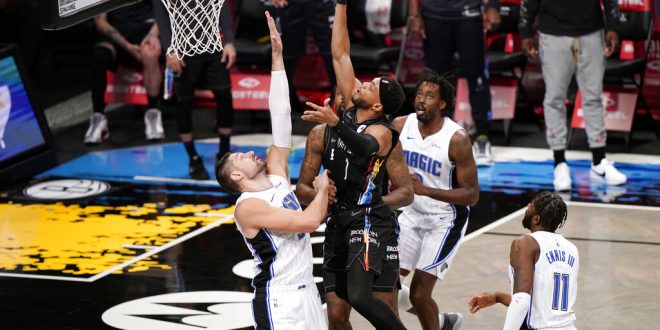 The Orlando Magic dropped their second straight game Thursday night after losing to the Brooklyn Nets, 129-92.

While Orlando managed to have three players in double-figures on Thursday night, it wasn’t enough to keep up with the explosive Nets’ offense. The Magic held a slight lead at the end of the first quarter, but Brooklyn came out in the second quarter on fire and never looked back.

The Nets had four starters in double-figures by the game’s conclusion, including point guard Kyrie Irving and guard James Harden. The duo managed to combine for 47 points and six three-pointers to help carry Brooklyn to the victory.

Additionally, the Nets as a team were sharp from the three-point line all night long. Brooklyn finished with 20 made three-pointers by the game’s conclusion.

The Nets were able to put up these numbers despite not having forward Kevin Durant in the lineup for the sixth-straight game. Durant continues to nurse a strained left hamstring injury.

For the Magic, turnovers played a key role in the game’s outcome Thursday night. Orlando had a total of 18 in the game, and Brooklyn was able to take advantage of this on the other end of the floor.

The Nets scored 24 points off of Magic turnovers and held Orlando to 40 % shooting from the court. Furthermore, the Magic only managed to knock down nine three-pointers, finishing 9 of 36 at the end of the game.

Center Nikola Vucevic led the way in scoring for Orlando, racking up 28 points and 12 rebounds.

Orlando will look to snap its two-game losing streak when it hosts the Utah Jazz on Saturday. Tip-off is scheduled for 8 p.m.

Brooklyn will look to keep its eight-game winning streak alive when it welcomes the Dallas Mavericks to town on Saturday. Tip-off is set for 8:30 p.m.