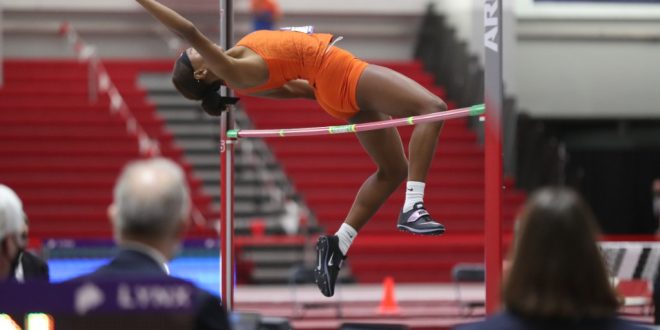 Florida Track and Field began competition in Fayetteville, Ark on Thursday at the 2021 SEC Indoor Track and Field Championships. The Gators have already made a strong statement in the championship meet early on. At the conclusion of their first day of competition, the women’s team lead with a score of 16 while the Men rank third with 10 team points.

Thrower Thomas Mardal was grabbed his second consecutive SEC Championship Title when he threw for 23.89 meters, 24.15 meters, and 24.16 meters. If the title was not enough, Mardal broke UF’s records three times yesterday and then an SEC Championship record. Entering the competition, the thrower led the nation in the weight throw. Now with a repeat title under his belt, Mardal leaves the competition by proving he’s the best.

Competition will resume on Friday at 12:55 p.m. with the Men’s Long Jump featuring Malcolm Clemons and PJ Austin who are ranked sixth and 13th in the NCAA. Then, the conclusion of the event will be found on Saturday with matchups scheduled to begin at 1:55 p.m.

Parker Welch is a Junior at the University of Florida majoring in Sports Media at the College of Journalism & Communications.
@parkerrwelch
Previous Magic Drop Second Straight in Loss to Nets
Next Lightning get their third straight win over Carolina