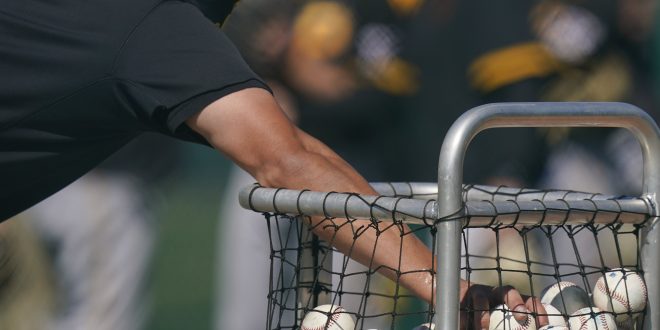 Some things are bigger than baseball. Trey Mancini’s return to the Baltimore Orioles and to the plate after being diagnosed with Stage 3 colon cancer, almost a year to the date, is indeed bigger than baseball. But, because of the sport, the full-circle moment was one to celebrate with great joy and gratefulness for good health.

.@TreyMancini got a hit in his first at bat back from colon cancer.

“All day I have been running through the last year and everything that me and Sara and my family have gone through,” he said. ” It is almost a year to the day, think a couple days off, when I was last in a game so it definitely was a moment where I felt it came full circle a bit.”

The Orioles first baseman arrived in Sarasota a year ago ready to reinforce his role on the team after his 2019 campaign. Mancini hit 35 home runs and had 97 RBI’s, primed and ready to hold down his spot in the lineup for the upcoming 2020 season. Just five games into the spring training season, Mancini suffered low iron levels causing more tests and questions. Doctors later found a malignant tumor on his colon. He was forced to take a step away from baseball. The 28-year old had surgery to remove the tumor on March 12, 2020. The same day spring training was shut down, subsequently when the entire country began to come to a screeching halt.

Amongst a global pandemic, Mancini was focused on his six-month chemotherapy treatment plan. Meanwhile, his team re-grouped to return safely to the field in the summer. Mancini finished up his treatment plan in September and was cleared to return to baseball activity in mid-fall.

Months later, in the same locker room where he delivered the news of his cancer diagnoses with his teammates a year prior, Mancini returned to baseball. This time, ready to suit up with his team with a clean bill of health.

” You know I have really tried to appreciate and cherish the day,” he said about his return to the batter’s box. ” You know I really did that.”

As the first baseman ascended into the batter’s box, the applause began to rumble. From the dugout of the opposing Pittsburg Pirates, fans and even the umpire took a moment to celebrate his return. Audible cheers continued to ring through Ed Smith Stadium as pitcher Chad Kuhl stepped off the mound as a sign of respect to continue the moment. To mark the end of a glorious moment, Mancini ripped a single through centerfield. Clearly, his return to baseball was met with great preparation and anticipation.

” It was amazing, I almost teared up a little bit,” he said. “When everyone gave me a standing ovation and I saw all the guys on the field clapping on the Pirates and in the dugout and of course our team and our fans, it meant the world to me. It was a really cool moment, one of my favorites in my baseball career.”

Mancini’s journey back to the diamond is a reminder of what true determination looks like and to appreciate the gift of good health. Keep F16hting.