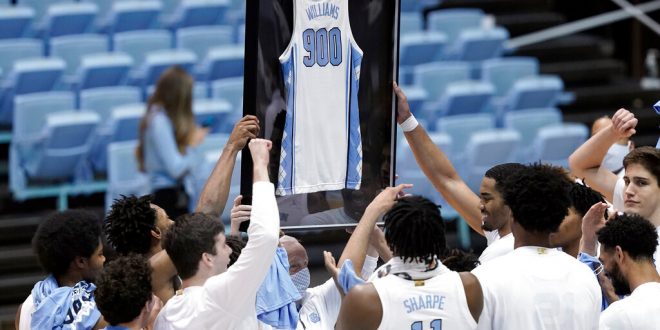 With fans in attendance for the first time this season, the Tar Heels delivered. Head coach Roy Williams won his 900th game as a head coach as his team took down No. 11 Florida State 78-70.

North Carolina pulls off the comeback

It seemed unlikely that Williams would earn his 900th win against the top team in the ACC on Saturday. At one point his team was down 16 points and needed a spark. He got just that from freshman Walker Kessler. The 7’1 forward delivered the best game of his young career.

Kessler put up 20 points, four blocks and eight rebounds, which are all season highs. The potential has always been there, and with the season winding down, he picked the perfect time to put it all together.

The Tar Heels, after being down 41-29 in the first half, outscored the Seminoles 49-29 in the second. Making a big comeback and taking down a rival was great for Williams’ team, but it also put him in elite company.

Only the fifth division one head coach to ever eclipse 900 wins, Williams joins other greats. Mike Krzyzewski, Jim Boeheim, Jim Calhoun and Bob Knight are the only others to accomplish this. However, Williams has one-upped them. He became the fastest coach to ever hit the mark. In 1,161 games, Williams bested Krzyzewski’s next fastest time of 1,183 games.

While Williams had plenty to do with his record. The longtime coach was quick to thank all of his current and former players and assistant coaches.

He also made the point that this was just another game to him and all he cares about is winning, regardless of the milestone.

How will this team respond after such a dramatic game? Williams team will answer that tonight when they visit Syracuse. The Tar Heels are 15-8 and sixth in ACC, while  Syracuse is 10th in the conference with a 13-8 record. Both teams are unranked. Tip-off is set for 7 p.m.