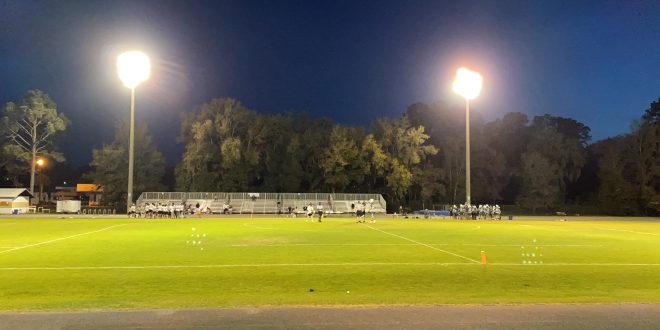 The Buchholz Boys Lacrosse Team stunned Flagler Palm Coast Monday night, 5-4 after the Bobcats scored the game-winning goal in the final minute of the game.

The Buchholz Bobcats opened their season on February 15th, trouncing cross-town rival Gainesville High School, 11-0. However, Buchholz could not find that same success in their next 3 games, losing by double-digits in each contest. The Bobcats found themselves entering Monday night’s game against the Flagler Palm Coast Bulldogs with a 1-3 record.

The first quarter started off slowly. Buchholz gained possession off of the opening face-off but struggled to get many offensive opportunities early. Similarly, Flagler Palm Coast was unable to threaten the Buchholz defense for the first half of the quarter.

Both teams went back and forth in possession until the Bulldogs were able to strike. With just over 5 minutes to play in the opening quarter, Flagler Palm Coast’s Spencer Cover made a move to the right of the net and tucked away the game’s opening goal.

The remainder of the first quarter was dominated by Flagler Palm Coast. Lengthy possessions in the offensive zone resulted in several attacking attempts. However, all of the attempts were met with key defensive stops by the Bobcats. Buchholz defenseman Josh Garzon was able to intercept the ball and finally return possession to the Bobcats.

Neither team was able to convert for the remainder of the quarter, and the Bulldogs took their 1-0 to the second period of play.

Buchholz entered the quarter trailing by a goal but were quickly given a man advantage as the result of a slashing penalty. Unfortunately, the Bobcats’ offensive pressure was ended by a mouthguard violation. This was the first of three mouthguard violations that that Bobcats received.

Both teams traded possessions, highlighted by a nifty spin move by Flagler Palm Coast’s Jesse Sustaita. This was met with an impressive save by the Bobcats’ goalie, Aiden Smale.

Following a timeout, Buchholz picked up possession in the offensive zone. After a series of crisp passes around the defense, and a delayed penalty, Bobcats’ Midfielder Xavier Emma was able to cut through the middle of the defense and score to tie the game.

Buchholz received a man advantage immediately following the goal, however, they were forced to turn over the ball following another mouthguard violation. Not long after, Buchholz regained possession of the ball with a desire to take the lead. The Bobcats capitalized shortly after courtesy of a beautiful spin-move by Braydon Girard, who directed his shot into the back of the net. Buchholz gained their first lead of the day with just over 2 minutes to play in the half.

Both teams once again traded possessions in the final moments. Bulldogs’ Jesse Sustaita attempted a shot while falling down, which was redirected by Buchholz’s Smale yet again. A long pass down the right side of the field to Bobcats’ Evan McNamee gave Buchholz an immediate offensive chance. However, they had less than 15 seconds until the half with which to work with.

McNamee made no waste of the opportunity, finding Girard directly to the left of the net. Girard slid the ball past the Bulldogs’ goalie with just 7.7 seconds left in the half to extend the lead. Flagler Palm Coast was given a penalty in the closing seconds, which Buchholz would serve at the beginning of the second half.

Buchholz opened the third quarter with a man advantage and maintained control of the ball for almost three whole minutes. Despite the Bobcats’ dominance to start the half, Flagler Palm Coast had no plan to sit back.

Bulldogs’ midfielder Dylan Toriello gained possession of the ball at midfield and did the rest himself. Toriello ran all the way to the net, shrugging off a defender with his shoulder in the process, and put the ball past the goalie to quickly get the Bulldogs back within one.

Flagler Palm Coast was able to gain possession off of the face-off for one of the only times all game. Both teams briefly traded possession, but each committed turnovers. Toriello once again gained possession of the ball and advanced into the offensive zone. Instead of driving again, Toriello stopped a little over 20 yards out and sniped the top left corner of the net to tie the game with 7:19 to play in the third quarter, just over a minute after his first goal.

The remainder of the quarter once again saw back and forth action from both sides. Both teams had offensive opportunities but were squandered by outstanding interior defense. Buchholz and Flagler Palm Coast entered the fourth quarter tied at 3.

Intensity picked up in the fourth quarter, as both teams hoped to pull out the hard-fought victory. Tremendous defensive pressure by Buchholz’s Donovin Jones earned an ovation from the Bobcats’ faithful. However,  a third mouthpiece violation by Buchholz returned possession to Flagler Palm Coast.

A few missed shots by the Bulldogs, which was followed up by a Buchholz turnover set up Flagler Palm Coast in the offensive zone again with an opportunity to take back the lead. Bulldogs’ Jesse Sustaita gained possession behind the net, moved around the crease, avoiding a defender on the way, and netted the go-ahead goal to give Flagler Palm Coast the lead yet again.

The Bobcats’ starting goalie, Aiden Smale, received an unsportsmanlike penalty following the Bulldogs’ goal, which forced backup goalie Sebastian Dietz into action. However, the Buchholz defense stepped up and were able to kill the penalty without Dietz having to face a shot. Smale returned to the game after the penalty was served.

Following the conclusion of the Buchholz penalty, the Bobcats were able to maintain heavy pressure in the offensive zone. Still trailing by one goal, Bobcats’ Braydon Girard gained possession of the ball, worked his way to the crease on a strong drive. He was able to net the equalizer while falling to the ground with just over four minutes to play. Girard, who had left the game for a stretch in the third quarter due to injury, was able to complete the hat trick and tie the game for the Bobcats.

Buchholz would retain possession for much of the remaining time. Two penalties by Flagler Palm Coast in the final four minutes thwarted any momentum that they had gained.

Entering the final minute of the game, Buchholz resided in the offensive zone, and sent the ball around the field with crisp passes, looking for an opportunity to attack. The Bobcats reset their offense, quickly sent in substitutions with under 45 seconds, and then proceeded onto one final attack. With just under 30 seconds to play, Buchholz’s John Allen Willis attacked the interior of the Bulldog defense. He snuck a bouncing shot just under the goalie’s stick to give Buchholz the lead with 22.3 seconds remaining.

Buchholz’s John Haugh won the ensuing faceoff, as he was able to do for most of the game, and the Bobcats played keep away for the remaining moments. Flagler Palm Coast was unable to cleanly gain possession of a ground ball in their defensive end as the seconds ticked off the clock. Time expired as the Bulldogs attempted to gain possession of the ball, and the Buchholz Bobcats were able to escape with a thrilling victory.