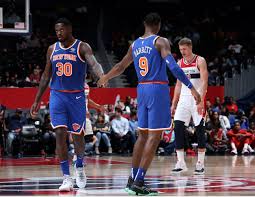 After finishing seven straight seasons below .500 including a pair of 17-65 seasons, the New York Knicks find themselves in fourth place in the Eastern Conference Standings — a position that would grant Madison Square Garden its first home playoff series since the Carmelo Anthony-led Knicks hosted the Boston Celtics in 2013.

“I’m not really surprised where we’re at as a team,” Knicks forward Julius Randle said. “We have a certain level of focus on a night-to-night basis that gives us a shot every [game].”

New York has won seven of their last ten games and is coming off a 19-point road victory over the Detroit Pistons in which the Knicks shot over 50% from the floor. All-star power forward Julius Randle displayed his versatility, racking up 25 points, eight rebounds and six assists in the 109-90 win. The former Laker and Pelican averages a team-high 23.4-point, 10.9-rebound double-double in his second season in the Big Apple.

“I just try to be a constant voice for our team — a sustainable guy that the team can depend on every night,” Randle said.

The Knicks shot the lights out from beyond the arc, splashing 13 of 26 3-point attempts. Shooting Guard RJ Barrett hit a pair of threes en route to chalking up his 13th 20-point game since the start of January. The 20-year-old Duke alumnus dropped 21 points on 8-13 shooting from the field. Since arriving in New York, Barrett has started 90 of 91 games while providing the Knicks a much-needed boost offensively as their second-highest scorer averaging 16.5.

After the game, Knicks head coach Tom Thibodeau called his team emotionally tough in the win. “To get through the ups and downs of the game, I think we’re getting stronger and stronger.”

Got the job done. But we keep on working. pic.twitter.com/9d6yOftsL4

Since acquiring point guard Derrick Rose from the Pistons at the beginning of February, the Knicks have received an additional 12.5 points per game and 4.9 assists from the former MVP. In return, New York dealt former first-round pick Dennis Smith Jr., who scored seven points and collected seven boards Sunday in the Pistons’ loss to the Knicks.

The Knicks will look to stay above .500 as they head south to face the San Antonio Spurs tonight at 8:30.

“The challenges will keep coming and we have a lot to work on and a lot to improve upon,” Thibodeau said.

Hello, I am currently a junior at UF studying sports media journalism with a concentration in Political Science. I contribute web and radio content weekly for WRUF ESPN Gainesville. Be sure to check out some of my recent articles!
Previous Watt Joining Texans on 2-year, $31 Million Deal
Next Buchholz Boys Lacrosse Tops Flagler Palm Coast With Last Minute Goal