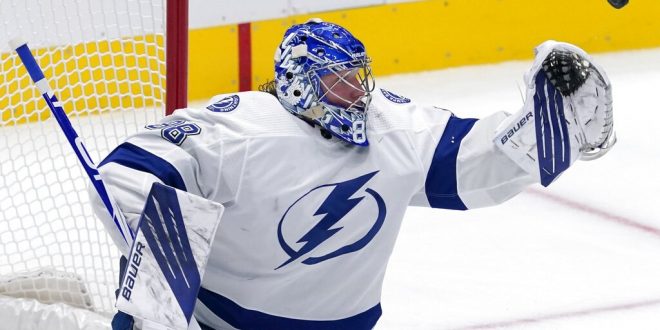 Tampa Bay Lightning goaltender Andrei Vasilevskiy reaches out attempting to glove a shot from the Dallas Stars in the third period of an NHL hockey game in Dallas, Tuesday, March 2, 2021. (AP Photo/Tony Gutierrez)

Andrei Vasilevskiy is the NHL’s number one goalie in terms of goals allowed at 1.65 goals allowed per game. The 26-year-old has not allowed a goal since 45 seconds left in the second period in the February 22nd games against the Carolina Hurricanes.

Lightning coach Jon Cooper told AP about Vasilevskiy “You can see that confidence. … The thing that has grown the most is the way he can calm himself during a game.”

Tampa Bay as a team scores the most goals per game while averaging the 10th least shots attempted per game.

Lightning center Steven Stamkos is having the most efficient season of his career shooting 21.3 percent. The 30-year-old is also winning a career-high 55.4 percent of faceoffs.

Tampa Bay defender Victor Hedman is on pace for his first season averaging a point per game. He also has 24 blocks and 25 hits on the season. Hedman was voted player of the month for the Lightning.

The Lightning are on a five-game win streak – three against Carolina, two against Dallas – the highest currently in the league.

They next play the Chicago Blackhawks in three games over four days.

Jensen Young is a journalism student at the University of Florida. He works as a sports writer for WRUF.com and is the voice of trendings on Wednesday mornings on the WRUF radio station.
@Jensen_Young9
Previous Gators Baseball To Face FAU in Midweek Game
Next SEC Hoops Roundup: Regular Season Coming to an End