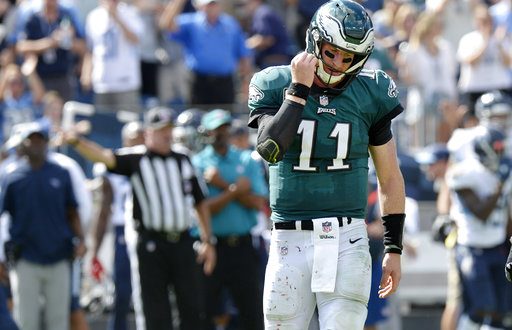 Pro Football Focus’ Anthony Treash joined Steve Russell to talk all things NFL. If you missed it, here is a rundown of the most important things that were discussed.

What to do with Deshaun Watson

Houston Texans’ starting quarterback Deshaun Watson has made it perfectly clear that he will not suit up again in a Texans uniform. The Senior College Analyst for PFF discussed two different avenues Houston could go down with their frustrated star. He suggested Houston to trade Watson before the draft in order to get one of the young quarterbacks this year, such as Justin Fields or Zach Wilson. His backup option for Houston was to trade Watson during training camp, but then the Texans miss on a chance to get that high draft pick.

In case you missed it, the Philadelphia Eagles traded quarterback Carson Wentz to the Indianapolis Colts for a second and third round pick. Treash believes it was the right decision for the Eagles to ship Wentz, but he doesn’t like the Colts’ decision to trade for him.

Treash also gave his thoughts on the New York Jets. Flush with cap space, the Jets are in position to make a big splash in free agency this offseason. Treash believes they will. However, he does not want them to make a big push for Steelers’ receiver Juju Smith-Shuster, who New York has been linked to. He claimed their money would be better spent retaining their secondary pieces in Marcus Maye and Brian Poole. His biggest wish for the Jets? He wants them to move on from Sam Darnold and draft Zach Wilson at No. 2 overall in the draft.

One of the ongoing storylines over the last few years in the NFL has been the back-and-forth between the Dallas Cowboys and quarterback Dak Prescott. Prescott feels as if he deserves a long-time contract, but the Cowboys have yet to budge. Now, with the quarterback coming off a serious injury, there are even more concerns for Dallas to worry about before signing the star. Treash believes Dallas should sign Prescott to a long-term deal. While he has his faults, Treash says Prescott is a better option than what else is out there right now.

Michael Hull is a sophomore at the University of Florida and is currently studying Journalism & Sports and Media.
@Michael_Hull33
Previous Arizona Cardinals Have High Hopes for 2021 Season
Next Several UF Players Invited to Combine