The Sun didn’t show up, but the defenses did. In an in-state exhibition match between the Florida Gators soccer and #1 Florida State, the match ended in a 0-0 tie. The teams played three 30-minute periods. 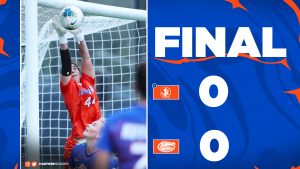 This was Florida State’s first non-win of the season. Although it was an exhibition match, the intensity and passion was there for both teams.

Florida State had control of possession for the majority of the match. But as the Gators have all year, they continued to fight and play their game. Bend don’t break. The Florida defense was able to handle the constant attack from the Seminoles and cause deflections, disrupting the offensive flow. Even when FSU got shots off, they were kicking into a brick wall. Susi Espinoza had three saves on the day and did not allow anything to slide by.

The toughest part for Florida today was the persistent pressure from FSU. This is the reason Florida only had two shots, both coming in the third period, to Florida State’s 15. Off a miss, the Noles would press the Gators defenders and they would either have to clear the ball out or turn it over because they were always under duress.

When Florida did have their opportunities, they would attempt to settle things down and run some sets but FSU pushed the Gator players, never letting up. 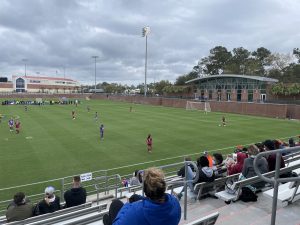 As indicated from the pictures, there were different applications of pressure from each team in their respective zones. When Florida had the ball, FSU would bring their forwards up and heckle the Gator defenders. When FSU had the ball, Florida did not use its energy to apply pressure but relied on its defense deeper in the field. 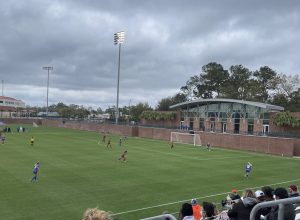 This strategy worked in the Gators favor though because they trusted their defense and goalkeeper to hold their own. A great example of trust was displayed when Susi was brought out of the goal and her teammates filled in for her. This was also Susi’s second consecutive shutout, both against ranked opponents.

Susi gets pulled out from goal but her teammates got her back with the save! @GatorsSoccer @ESPNGainesville pic.twitter.com/yMbkrwtp77

Overall, it was a hard-fought match by Florida against a top-class team that could have easily put some goals up. And although there is bad blood between these schools and teams, FSU showed their respect for Florida’s head coach Becky Burleigh prior to the match.

What is Next for Florida

Florida will face Georgia Southern on Thursday, Mar. 11 at 6 p.m. It will be Becky Burleigh’s final home game as a Gator, as well as Associate Head Coaches Vic Campbell and Alan Kirkup.

Georgia Southern is 4-10-1 on the season, only playing one match this spring, a 2-1 win over Stetson.