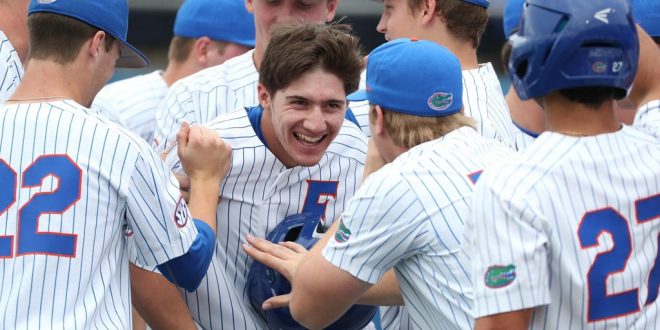 Not a cloud in the sky hovered over Florida Ballpark on Sunday afternoon as the inclement weather from a day before was nowhere in sight. With the sun shining overhead, the Gators were able to complete the sweep against Florida A&M in an 8-0 win over the Rattlers.

Perhaps more exciting for the Gators and their captain Jacob Young was a celebration in the bottom of the eighth inning. The left-fielder extended his hitting streak to 30 games which put him in sole possession of the school record. The loudest roar of the afternoon came when Young battled at the plate in his fourth at-bat of the game to fight for an infield single on a 3-1 count.

“First of all I want to congratulate JY, it is a heck of an accomplishment to be that consistent for that long of a time,” Head Coach Kevin O’Sullivan said. “Just really happy for him, that is something that is really hard to do.”

Young’s hitting streak spans three seasons and marks the first time in the programs’ over 100-year history has anyone accomplished this record.

In addition to Young’s work at the plate, the Gators got to work early at the plate. In the bottom of the first, a no-doubter home-run from centerfielder Jud Fabian, scoring Jacob Young who reached on error sent the Gators up early 2-0. Singles down the line from Nathan Hickey, Kirby McMullen and Butler loaded the bases. Left-fielder and freshman Sterlin Thomson who has held down the seventh spot of the lineup most all season came through with a ground out to score an additional run.

Heading to the bottom of the second with a 3-0 lead, Florida tacked on two more runs with a double from Hickey. Notably back in the lineup in Sunday’s matchup was second-baseman Cory Acton and designated hitter Kirby McMullen who returned this weekend after recovering from an injury.

“It was good to get Kirby back into the lineup as well because he gives us that extra bat in the middle of the order,” O’Sullivan said.

The Gators added two more in the bottom of the third. Right-fielder and freshman Sterlin Thompson got in on the action with a leadoff single, followed by Halter who advances to first on an error. Another error for the Rattlers infield gives Rivera a single, scoring Thomson and Halter follows while Rivera is thrown out on the base path to give the Gators a 7-0 lead. Florida would add its’ final runs in the bottom fifth with another hit from the freshman third baseman Halter. His double scored the final run of the game, 8-0.

“Sterlin Thompson, between him and Colby I mean what can you say,”  he said. ” We just need to get a couple more guys going offensively and I think we will be a pretty good offensive club when it is all said and done.”

Consistency On the Hill:

Back on the mound today for the Gators was Sunday starter and lefty Hunter Barco. Notching his second win of the season, the southpaw logged five innings, allowed two hits and nine strikeouts. Though it was a quick outing, O’Sullivan was pleased with his performance.

“Hunter was good again today, that is two good outings for him,” he said. “The last two starts are what we are hoping and expect from him.

With Barco back in the dugout in the fifth, the Gators were able to rotate through their bullpen to get other guys on the mound. Following Barco was Timmy Manning in the sixth, Jordan Carrion and Christian Scott in the seventh and Franco Aleman in to close it out. In what has been a weak spot for Florida early on to start the season, it seems the bullpen is rounding out to become a dependable part of the game for the Gators.

The Gators will be back in action at the Florida Ballpark on Tuesday to face Georgia State. The first pitch is set for 6 p.m. to take on a young and competitive panther’s team who has knocked off second-ranked Vanderbilt, 10th-ranked Georgia Tech and 14th-ranked West Virginia.