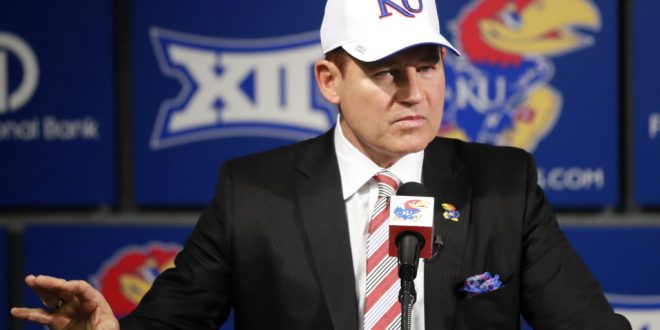 Late last night, Kansas made a late addition to the list of schools that will be led by a new football coach this fall.

Jayhawks administration announced Monday that head football coach Les Miles would not return to Lawrence as they “mutually agreed to part ways.” This move came after athletic director Jeff Long announced Friday that Miles was to be placed on administrative leave. Long stated that a full review would be conducted as Miles faces allegations of misconduct during his time at LSU.

Thursday’s report found Miles accused of messaging students via text and Facebook, meeting off-campus with students, and of kissing at least one female student. The report did not find any sexual relations between Miles and students.

Friday’s report came through a Title IX investigation into LSU’s athletic program; it also caused the dismissal of two other high-ranking officials in the school’s athletics department.

Husch Blackwell was hired for the probing after a November USA Today investigation found that LSU mishandled repeated complaints of sexual misconduct. The article brought forward allegations against multiple prominent Tiger football players, including a slew against former star running back Derrius Guice.

Miles and his attorney, Peter Ginsburg, have both vehemently denied the allegations. Miles claims he was only mentoring female LSU students.

Ginsburg dubbed Kansas’ decision to put Miles on leave “bending to the winds of media blowback,” “disturbing,” and “unfair.”

Miles won a BCS National Championship with the Tigers in 2007 and is LSU’s second-most winningest coach in program history. With the Tigers, he earned wins in the Peach, Sugar, and Cotton Bowls during his 11 seasons.

Next Steps for Jayhawks

The Jayhawks’ performance on the field was lackluster during Miles’ tenure as coach, as it was for the previous decade.

Miles was not exactly the answer to Kansas’ woes on the field. They hoped to right the ship in his hiring and prestige.

Yet, last fall, Kansas went 0-9 in a COVID-19 shortened season, their second time going winless since 2015.

As for the future of football in Lawrence, anything better than what they’ve done since 2010. Kansas went 18-99 in the 2010s, did not win more than three games in a season, and finished no higher than 9th in the Big 12 standings.

New offensive coordinator Mike DeBord will serve as acting head coach until an interim is determined. Long said Kansas will use a search firm to help find the Jayhawks’ next head coach, their fifth since 2014.

Caleb Wiegandt is a first-year Journalism student on the Sports and Media track in the University of Florida's College of Journalism and Communications. He has previous bylines in USA Today, Yahoo Finance, and The Louisville Courier-Journal before arriving at ESPN Gainesville. Caleb is a proud graduate of Holy Cross High School in southwest Louisville, Kentucky, where he was born and raised. You can reach Caleb at cwiegandt@ufl.edu.
@@CalebWiegandt
Previous Brown Returns to New England
Next Seattle Seahawks Release Former Gator Carlos Dunlap