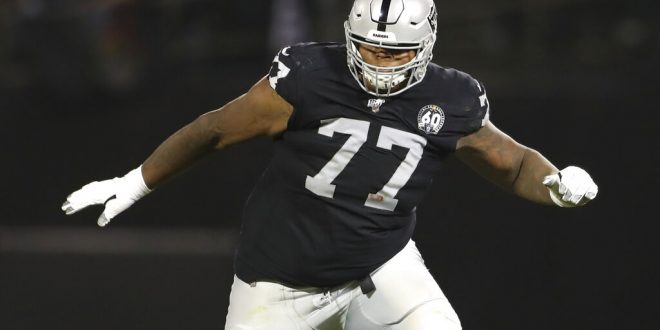 FILE - In this Sept. 9, 2019, file photo, Oakland Raiders offensive tackle Trent Brown (77) protects a gap in the offensive line during an NFL football game against the Denver Broncos, in Oakland, Calif. Las Vegas Raiders general manager Mike Mayock says the “jury is still out” on whether highly paid right tackle Trent Brown will be back in 2021 after being limited by injuries in his first two seasons with the team. (AP Photo/Peter Joneleit, File)

Former Gator Trent Brown is returning to New England after being traded from the Las Vegas Raiders.

The Patriots and Raiders have agreed to a trade that will send OT Trent Brown to New England, per sources.

Brown has also agreed to a reworked contract for one year that is expected to be worth up to $11M as part of the deal.

Brown returns to the Pats on a one-year contract worth up to $11 million, according to ESPN Insider Field Yates. While it’s not as big as his last contract, he doesn’t seem to mind, posting on Instagram that, “I LOVE IT HERE !! @patriots”

Brown previously played for New England in 2018. He started every game of the season and won the Super Bowl protecting future Hall of Famer Tom Brady and Sony Michel. Brady recorded over 4,000 passing yards and 29 passing touchdowns behind Brown. Michel tallied 931 yards on 209 rushes and six rushing touchdowns.

After a stellar year playing linemen for New England, Brown signed with the then Oakland Raiders, becoming the highest-paid offensive lineman in NFL history. While he never missed a game for Brady and the Pats in 2018, Brown only played 16 games in two seasons for the Raiders. In 2020, he only played 26% of the Raiders’ offensive snaps.

Brown played two seasons for Florida in 2013 and 2014 before being drafted in the seventh round of the 2015 NFL Draft by the San Francisco 49ers. According to FloridaGators.com, he was a pivotal part of the Gator’s offensive line. In 2014, Florida allowed only 16 sacks on the season, the third-best in the SEC.

What This Return Means for New England

According to Pro Football Focus, Brown had a grade of 73.4 in 2018, ranking 27th among tackles that year. New England will need him to replicate this success in 2021, as they allowed the 14th highest number of sacks.

New England released quarterback Cam Newton after his less than stellar year for the Patriots. The return of Brown will likely aid New England in its search for a new offensive leader.

Matthew Bell is a senior at the University of Florida. He completed his associates degree at State College of Florida in Bradenton and transferred to UF in 2019. His favorite sports are American football and baseball.
@@write_matthew
Previous Dak Prescott Inks Long-Term Deal with Cowboys
Next Kansas-Miles Separating Amid Accusations