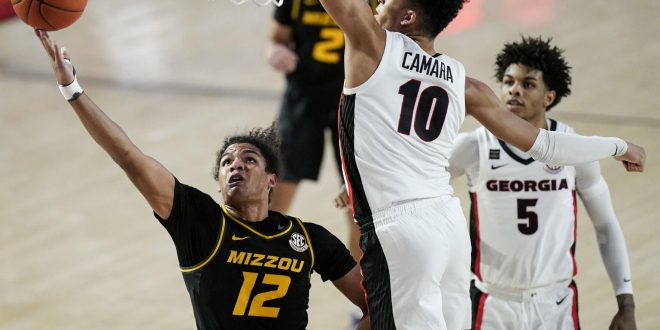 Tilmon and Mizzou Seek Revenge Against Georgia in SEC Tournament

After losing to Georgia on the road by double digits less than a month ago, the Missouri Tigers will look to redeem themselves Thursday night in the second round of the SEC Tournament. The teams will tip off at the Bridgestone Arena in Nashville, Tenn., at 7 as the game airs on the SEC Network.

Following a 6-0 start to the season including an impressive win over No. 3 Illinois, Mizzou went 8-8 in conference play and earned the No. 7 seed in the SEC.

Georgia earned the No. 10 seed in the the tournament after dropping five of its last seven contests to finish 7-11 in conference action.

The Tigers were ranked inside the AP Top-25 for 11 consecutive weeks until they dropped out at the beginning of March. Mizzou climbed as high as No. 10 in the poll after they beat No. 6 Alabama on Feb. 6.

In their first meeting with UGA, Missouri played without its 6-foot-10-inch senior forward Jeremiah Tilmon. The presence of Tilmon this time around should give the Tigers the boost they need as the big man averages a team-high 7.4 rebounds and leads the SEC in field-goal percentage. Following a stellar senior season, Tilmon made the Second Team All-SEC.

Missouri relies on an experienced backcourt to generate most of its offensive opportunities. Senior guard Dru Smith and junior guard Xavier Pinson combine for over 28 points per game, while senior guard Mark Smith averages 10. In their first matchup against Georgia, Smith and Pinson combined for only 20 points; the duo shot just 34.8 percent from the floor 16.7 percent from beyond the arc. Smith plays elite defense as he leads the SEC in steals per game (2) for the second straight season and earned the first SEC All-Defensive Team honors in Missouri basketball history. The redshirt senior also made the First Team All-SEC.

The Dawgs are led by a pair of underclassmen guards — Sahvir Wheeler and K.D. Johnson — who both average over 13 points per game. Wheeler, a 5-foot-10-inch sophomore, made the All-Second SEC Team, while Johnson made the All-Freshman Team. Wheeler played exceptionally down the stretch; he scored a career-high 27 points against Florida before notching the first triple-double in Georgia basketball history against LSU.

Wheeler is one of the SEC’s top floor generals. He set the UGA single-season record for assists on Feb. 27 against South Carolina.

The winner of Thursday’s tilt will advance to the quarterfinals to face No. 2 Arkansas Friday. As it currently stands, Missouri and Georgia need to make a run in the SEC Tournament in order to have any chance of clinching a spot in the NCAA Tournament. In Joe Lunardi’s most recent bracketology, neither team made the field of 68 nor the bubble.

Hello, I am currently a junior at UF studying sports media journalism with a concentration in Political Science. I contribute web and radio content weekly for WRUF ESPN Gainesville. Be sure to check out some of my recent articles!
Previous NHRA Gatornationals return for second time in less than a year
Next Ole Miss Rebels Look to Make Tournament Push Against South Carolina Gamecocks