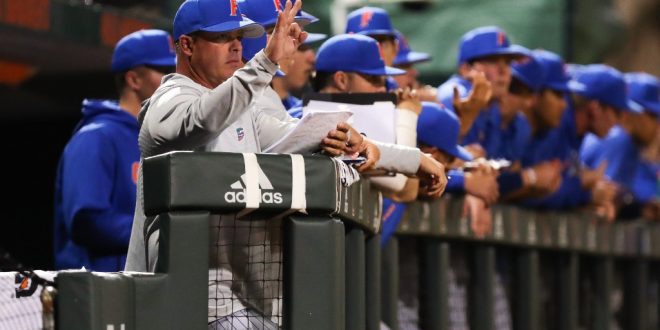 Florida Gators baseball made a comeback after last night’s loss to Jacksonville. The Gators left Jacksonville scoreless in game two of the series through nine innings with a score of 9-0. Florida out-hit Jacksonville 12-2 with an error on each side and improved their record to 12-4. The series finale is set for 1 p.m. tomorrow afternoon.

The Gators got their momentum going early in the game with a home run by Josh Rivera over left field in the second inning. The homer was Rivera’s second of the season in consecutive at-bats. The success at the plate thus far in the series was a confidence boost for Rivera.

Then in the third, the second home run of the night was hit by Nathan Hickey over the center field which brought in two RBIs and made it 3-0. The Gators brought the score to 4-0 when a wild pitch sent Colby Halter home. Finally, the eighth inning saw the most runs. A balk by Jacksonville pitcher Sam Brunnig sent the loaded bases around to push Halter over home plate. Then, a two-run single by Jud Fabian settled the score at 9-0.

Starting pitcher Jack Leftwich only allowed two hits and no runs during his solid performance of six innings. Leftwich struck out seven and felt himself develop a good rhythm early on. According to Leftwich, pitching past inning five was ideal for the team.

Pitcher Jordan Carrion came to the mound in the sixth where he allowed zero hits and struck out two. Leftwich stated that Carrion has shown to be a great competitor.

Finally, Brandon Sprout entered the game to close out the ninth to solidify a Gator win.

Sunday afternoon will decide the series winner with the first pitch set for 1 p.m. Left-handed pitcher Hunter Barco will take the mound for the Gators.