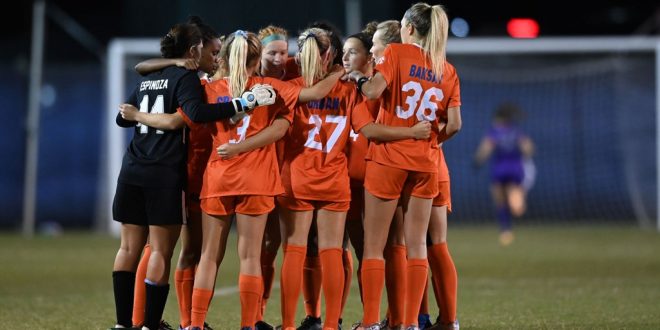 On Florida’s first road match of the spring season, the Gators soccer team (4-8-2) drops a neutral site match to Louisiana State (6-8-3), 2-1. Even with a shot advantage of 13-8, UF fell short to LSU in the final minutes. This was also the first loss for the Gators this spring season.

LSU struck first in the 41st minute to give the Bayou Bengals a 1-0 lead. Reese Moffatt would score for the Tigers and would later assist the second goal.

The Gators would tie the match up at one apiece in the 69th minute with a goal by freshman Beata Olsson. This goal would be assisted by Madison Alexander and Parker Roberts. It is Olsson’s third goal of spring.

UF was so close to taking the tie with LSU at Orange Beach, but in the 88th minute, LSU made a great play.

A nice pass with good loft by Reese and a great pin-point header by Molly Thompson.

Susi Espinoza was just barely behind the play for Florida. And Susi has played exceptionally well this spring, only allowing one goal in three matches prior to this one. As head coach Becky Burleigh said following the match, “Credit LSU for taking advantage of their late opportunity to get the win.”

What’s Next for Florida

After two matches in four days for Florida, they get a well-deserved break. Their next match will be in Jacksonville against UNF on Mar. 24 at 6 p.m.