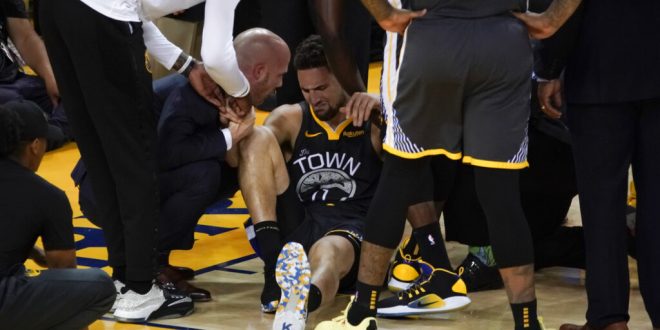 Golden State Warriors guard Klay Thompson, center, is helped up after being injured during the second half of Game 6 of basketball's NBA Finals against the Toronto Raptors in Oakland, Calif., Thursday, June 13, 2019. (AP Photo/Tony Avelar)

The Warriors haven’t been the same without the other half of their splash brothers duo — Klay Thompson.

They sit ninth place in the Western Conference at 20-19, one game out of the playoffs currently.

He met with reporters Sunday before Golden State faced the Jazz. He said he could return to the court early next season after he endured two brutal season-ending injuries.

Klay Thompson with a candid quote on next season: "I'll be honest, I don't expect to come back balls to the wall, 38 minutes a night, guarding the best player, running around 100 screens. I'm going to get to that point. I guarantee that."

Raptors guard Kyle Lowry drove to the basket but fumbled the ball as he reached the basket in Game Six of the 2019 NBA Finals. Golden State guard Stephen Curry scooped up the loose basketball and ignited a three-on-two fast break with teammates DeMarcus Cousins and Thompson.

Curry passed the ball as Thompson sprinted behind Toronto’s Serge Ibaka and Danny Green. He caught the ball and jumped off his left leg for a two-handed slam. But Green clobbered his right arm causing the former Washington State star to miss the dunk and fall awkwardly on his left leg.

He immediately clutched his left knee and sprawled across the baseline in serious pain. He suffered a left knee ACL tear and was forced to miss the entire 2019-20 season.

But Thompson was prepared for the 2020-21 season and was practicing with some other NBA players in Los Angeles on Nov. 19, 2020. He dribbled to perform a pull-up jump shot, a move he does 100 times a day and sustained a torn right Achilles tendon.

“So, it was just an unfortunate series of events,” he said. “Nothing I could have ever prepared for, nor prevented. I was working my butt off 10 months up to that point, and you just got to go back to the drawing board. I knew I did it right away, and it’s in the past, but I’m getting better every day.”

Update on his rehab

The 6-foot-6 guard said 2020 was one of the worst years of his life. A lot of people in the world feel the same way. He lost his Grandma, Kobe Bryant and experienced another devastating injury.

Klay Thompson on "probably the worst year of my life"

But this season he has spent more time rehabbing in the Warriors facility.

“It feels good to be back here,” Thompson said. “I feel love when I’m back in the Warriors facility.”

He underwent a successful surgery to repair his torn ACL and finally removed the boot that covers his leg. Thompson said he hasn’t started running yet, but he has been using an underwater treadmill.

However, Thompson believes the mental rehabilitation has been more difficult than having to work through a second straight season-ending injury.

“It’s way harder than any basketball game I’ve ever had to play,” he said. “Way harder than any conditioning drill or practice. The mental toll is not very fun. You always guess if you’re going to be the same player you once were, so you have those natural thoughts, but you can’t let those overtake you.”

But he’s taken comfort that former teammate Kevin Durant hasn’t skipped a beat after he suffered a similar injury. Thompson also reached out to Hall of Famer Grant Hill on how he handled several ankle injuries during the prime of his career.

Finally, he added that the support from his team, coaches and the organization help him get through the disappointment.

Zachary Huber is a senior journalism student specializing in sports media at the University of Florida from Jacksonville, Florida. He works at The Alligator, covering gymnastics and volleyball while working at ESPN Gainesville. Follow him on Twitter @zacharyahuber.
@@zacharyahuber
Previous Let The Dance Begin: NCAA Tournament Bracket Is Set
Next Ewing gets Georgetown back in the NCAA tournament